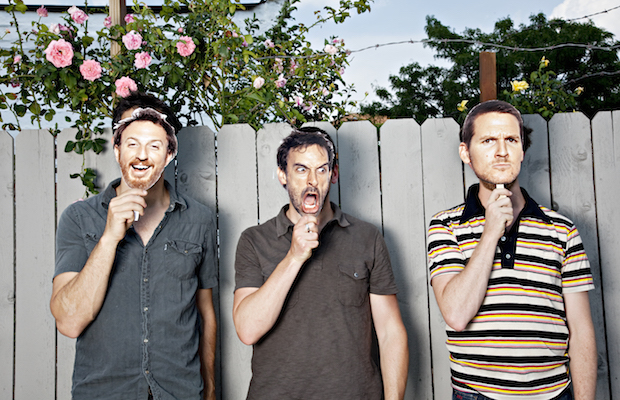 Guster are an American alternative rock band from Boston that were formed in 1991.  The founding members (Adam Gardner, Ryan Miller, and Brian Rosenworcel) met during a freshmen Wilderness Orientation program at Tufts University, and began playing publicly together two months later at a coffee house in the dormitory common area.  The band broke into the mainstream in 1999 with its third and fourth studio albums, Lost and Gone Forever and Keep It Together, respectively, which combined to generate three Adult Top 40 singles (“Fa Fa,” “Careful,” and “Amsterdam”).

The band’s music has been featured in a variety of television shows and movies, including Disturbia, Wedding Crashers, Life as a House, and more.  Guster released their seventh studio album, Evermotion, this past January. The album was produced by Shins keyboardist / Black Keys guitarist Richard Swift, over three weeks at his Cottage Grove, Oregon Studio.  The result is an album of raw acid-soaked chamber pop.  The band are known for their enviromental activism in addition to its live performance antics, which include opening for themselves.  It should be a good time down on the farm this summer.