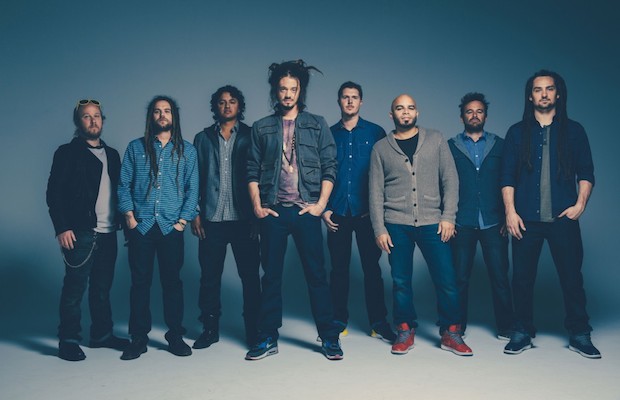 What does every good music festival in the heat of summer need?  Reggae!  That’s right.  Whether you are a connoisseur of the indica, sativa, or just groovy ass jams, we all agree that reggae and summer go together like peanut butter and jelly, and SOJA are just the band to bring those vibes to The Farm this summer.  A group of friends since the first grade, these guys originally formed as the Soldiers of Jah Army, and have since gone on to release 6 full-length records, 2 EPs, and a couple of live albums under the acronym SOJA since 1997.  The Virginia-based octet may not look like their Jamaican idols, but they certainly are some of the top reggae players in the world right now, as their 3 million plus Facebook fans will attest.

What has made SOJA so widely accepted is their pop-focused slant on reggae.  Just like the popularity of bands like Sublime, they have used reggae as the backbone to showcase their advanced instrumentation and a more palatable, radio ready sound.  You can certainly hear this evolution of the band when you run through their catalogue. Their earlier releases offer a more conventional dubby take, but spinning their latest release, Amid The Noise And Haste, which dropped in August 2014 on ATO Records, you can definitely hear that they have a sound destined for a wider audience now.  If you don’t have those records on hand, or just need a reminder of why they are the perfect opener for the What Stage this year in the Friday afternoon sun, head below to listen to “Open My Eyes” from their 2006 release Get Wiser, and then watch the video for “I Believe” from 2014’s Amid The Noise And Haste.