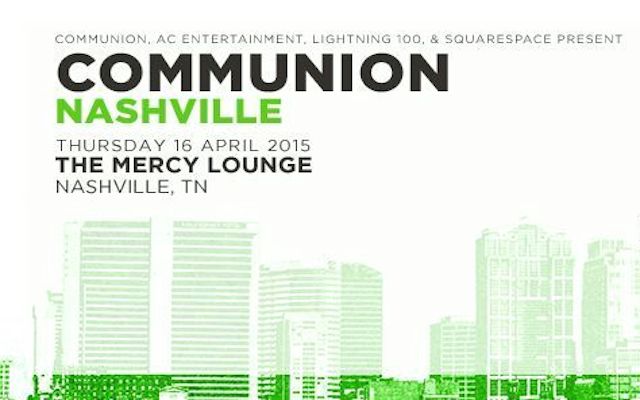 Hopefully, by now you are familiar with the monthly Communion showcase, and may have even attended one or two of the previous editions. If not, allow us to acquaint you with the series. Communion was founded by Bear’s Den Kevin Jones, producer Ian Grimble and Mumford and Son’s Ben Lovett back in 2006 in London as a way to highlight the best new music from local and national artists. Since then, its scope has broadened considerably. Not only does Communion now also host international touring artists, but it has expanded into numerous locations, including nine American cities. It happens on a monthly basis here in Nashville over at Mercy Lounge, and tonight, April 16, marks the newest installation. Attendees to tonight’s Communion will enjoy performances by Hey Rosetta!, Kevin Garrett, Jeffrey James and The Soft White Sixties. Day of show tickets cost only $15 and can be purchased here. This event is 18+ and begins at 8 p.m. (doors at 7). We’ve got a few words on each of the bands after the jump to help educate you on this awesome lineup, so keep reading…

Though the evening’s Canadian headliners Hey Rosetta! play indie rock, we can assure that it’s nothing like what you’ve heard before. While the core of their setup is the same as most indie bands (drums, guitars, bass and vocals), this seven person act also incorporates strings and pianos into their tunes. This lends a complex yet pleasing quality to the music, which is complimented by singer Tim Baker’s intelligent lyricism. Despite the impressive width of their sound palate, Hey Rosetta! do a remarkable job of staying focused and putting together meaningful, poignant tracks. The band released their fourth studio album, Second Sights, earlier this year, which features a more ethereal, expansive sound than their previous releases. In our opinion, these guys are were a great choice to headline tonight’s show, and may be one of the strongest acts you see at Communion this year.

Brooklyn based songwriter Kevin Garrett has garnered a good bit of attention recently thanks to his five track debut release, Mellow Drama. The instrumentals on this release are extremely stripped down, allowing listeners to focus on just two things: Garrett’s stunning voice and the album’s substantial emotional content. While comparisons to Sam Smith are inevitable, Garrett’s tenor voice displays an impressive range matched only by a handful of other artists around the world. Based solely on his style and talent, we see no reason why Garrett won’t explode in popularity over the next few years. Catch him while he’s still on the ground floor tonight at Communion, and be sure to check out his chilling track “Coloring” below.

Songwriter Jeffrey James is the only local act playing Communion this evening. Though James has largely made his name writing tunes for huge brands and television shows, his live shows are beginning to take off as well, thanks in large part to their lively nature. When playing live, James is accompanied by a talented backing band, who do a fantastic job of matching his energy and aesthetic. The band have promised to play several new tracks during their performance tonight, making this one you don’t want to miss.

Hailing from San Francisco, four piece act The Soft White Sixties bills their music as “Working Class Soul.” Frankly, this label fits their music perfectly. While the group does feature the dynamics vocals and general moody vibe of a soul act, they also incorporate heavy rock influences and a healthy dose of distortion. These two influence balance each other perfectly to create a irresistibly fun vibe. When combined with their upbeat live performances, it’s easy to see why this group is on the rise. They’ll be playing first, so get there right at 8 to catch their no doubt killer set.

Hey Rosetta!, Kevin Garrett, Jeffrey James and the Soft White Sixties will perform tonight, April 16 at Mercy Lounge. The show is 18+, begins at at 8 p.m. (doors at 7), and tickets are available for $15.