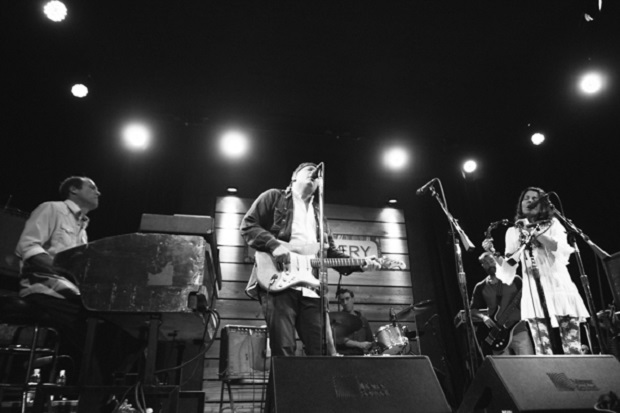 Festival veterans Donna the Buffalo, who just celebrated their 25th year, were back in town last Friday at City Winery.  Brett Bigelow and his Open Til Late band opened the show.  We have our full review a few photos from Mick Leonardi after the break. 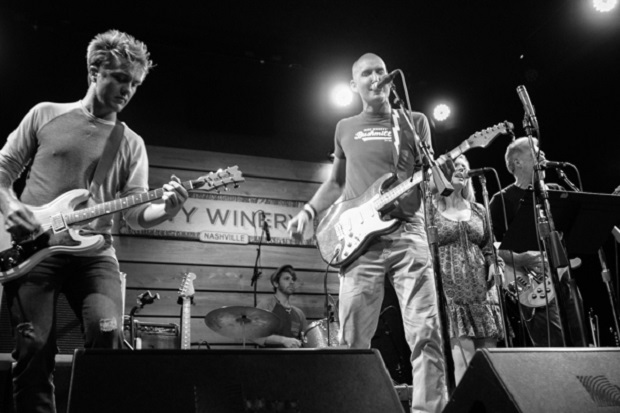 I was not at all familiar with Brett Bigelow ahead of the performance, but did a little research prior to the show to find out he is from Northern Alabama, and released a self titled first album last September, which apparently took some time to record due to Bigelow’s full-time dentist career.  As might be expected, his set consisted primarily (if not exclusively) of songs from that album.  This night, his Open Till Late band consisted of himself, Kenny Berry,  James Alan Irvin on guitars / bass, with Christian Clark on drums and Ruth Ann Conley on background vocals.  For one song, Brett brought out a fiddle player, whose name I didn’t catch.  The songs were a mix of country, southern rock, and Americana.  A few standouts were “Front Porch Light,” “Jack Ain’t Coming Back,” and the more upbeat “She’ll Never Know.”  Overall, it was a good opening set, and I’d be interested in checking out Bigelow again. 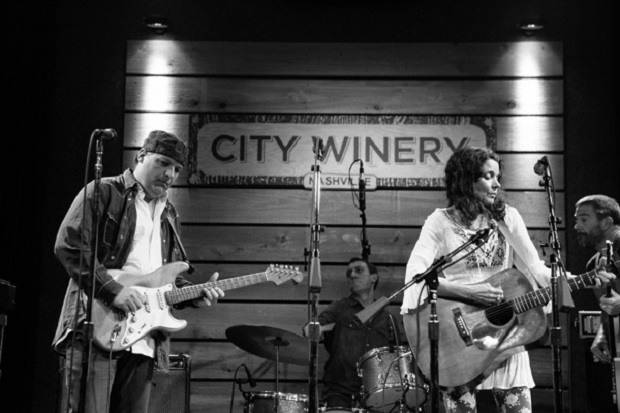 I’ve seen Donna the Buffalo a couple of times before, and really enjoyed them, but had no idea that they had been around for twenty years.  As soon as they kicked off their set, I found out that their fans (a.k.a. “The Herd”) like to dance.  The corner to the right of the stage (and directly in front of us) was apparently going to be where.  A few people around us attempted to explain to the dancers that they were blocking the view, but the Herd were undeterred. The show wasn’t sold out, so I just moved to high top table behind me and was able to enjoy the show on the stage and the crowd.   In general, the Herd aren’t the most graceful of dancers, but they seemed to be having a good time and the band seemed to appreciate it as well.  Founding members Jeb Puryear and Tara Nevins alternated lead vocals throughout the set.  Guitarist/vocalist Puryear kicked things off before announcing they’d been off for a couple weeks, but there was no evidence of any rust.  Next up was multi-instrumentalist/vocalist Tara taking the lead on “If You Only Could” followed by what I recognized as the title song of their latest album Tomorrow, Tonight and Yesterday, featuring keyboardist David McCracken.  Throughout the set, McCracken could be heard in all the right places without overpowering.  A few songs later, Jeb told the crowd that they were enjoying their time in Nashville and had even stopped in at Santa’s Pub, presumably for some karaoke.

It is difficult to classify Donna the Buffalo’s sound, as it is a mix of cajun, zydeco, tex-mex, raggae, ska, and surf music, while remaining clearly recognizable.  When Tara brings out the accordion, as she did for “Just Don’t Want To Be Lonely” and several others, you feel like you could be down in the bayou.  Although I’d seen the band previously, I wasn’t familar with their albums, but several set selections were from their latest, including a personal favorite of mine, “Working on That.”   I may have missed a new favorite of “I Love My Tribe” as I snuck out a bit early to beat the rush to the valet.  I am hoping that the next time I see Donna the Buffalo is at a festival and, who knows, maybe even do a little dancing.