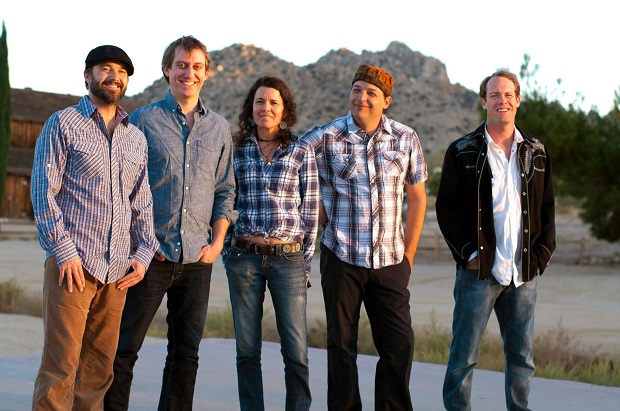 Donna the Buffalo will be returning to Nashville tonight, March 20 to play the City Winery at 8 p.m. Tickets are $18 in advance and $25 for VIP. We’ve seen the group around town several times, including at Music City Roots and Musicians Corner, so we are excited to see them headlining at one of our new favorite venues.  Opening will be Brett Bigelow, backed by his Open Til Late Band.

Donna the Buffalo just celebrated their 25th year as a band and a consistent purveyor of American music. “For the dizzying array of styles and genres with which they work, Donna the Buffalo maintains a surprising level of consistency. The New York-based band has played around with folk, zydeco, and many other musical ideas over the course of their 25-year career, but they retain a sharp focus that has helped them create some truly lasting music,” writes Elmore Magazine.

Donna the Buffalo (“DtB”) is Jeb Puryear (vocals, electric guitar) and Tara Nevins (vocals, guitar, fiddle, accordion, scrubboard) with David McCracken (organ, clavinet & piano), Kyle Spark (bass) and Mark Raudabaugh (drums).  The band have released ten albums and are affiliated with several others including, the group’s 2003 release with Jim Lauderdale, Wait Til Spring, Puryear’s 2007 solo album, Hopes and Dreams, and Nevins’ Mule to Ride in 1999 and Wood and Stone in 2011. DtB released Tonight, Tomorrow and Yesterday, their first studio album in five years, in the spring of 2013.  Both this album and the band’s 2008 release Silverlined did well on the Americana Music Charts, each placing in the top ten.

The band have also built a following that proudly calls itself The Herd.  As an expansion of this community and the Donna’s own dedication to live roots music, DtB started, and are still, the driving force behind several festivals, including the twenty-five year old Finger Lakes GrassRoots Festival of Music and Dance, the bi-annual Shakori Hills GrassRoots Festival, and the Virginia Key GrassRoots Festival in Miami, FL, and they are regulars at a variety of other venues and festivals. Donna the Buffalo have toured the nation for over a quarter of a century with an ever-evolving grassroots sound, and plan to keep on doing so for many years to come.

Brett Bigelow comes from the music rich area of Northern Alabama.  Soulfully honest vocals, driving rhythm, and a steady pumping beat keep the pace throughout Bigelow’s music, conjuring the spirit of blue collar rock, with a polished and precise overall sound.  Joining the Open Til Late (“OTL”) band for this show will be drummer Christian Clark and background vocalist Ruth Ann Conley.  Check out the official video for Brett’s first single, “She’ll Never Know,” from his self titled debut album, below.