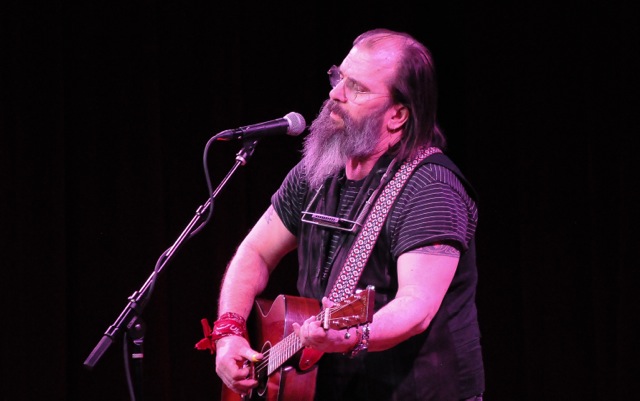 On Saturday night we caught the second night of alt-country legend Steve Earle‘s sold-out two-night stand at Nashville’s new and swanky City Winery. Opening were husband-and-wife duo The Mastersons, who count themselves as members of Earle’s band when they’re not doing their own thing. While to some the venue may be more about eating a nice meal with a good bottle of wine, the chance to see Earle took me out of my usual dive bar comfort zone to catch this aging legend.

Find our full review of Earle’s two-hour career-spanning performance plus photos after the jump. 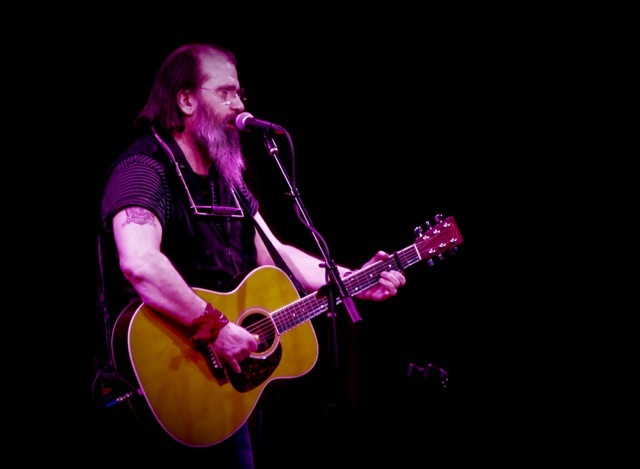 The opening band was the husband-and-wife duo the Mastersons, who play innocuous folk-pop that seemed well-suited to the dinner crowd. When the Austin-based couple Chris Masterson and Eleanor Whitmore aren’t doing their thing as the Mastersons, they’re in Earle’s backing band the Dukes. We weren’t allowed to snap any photos of them, but they both sang harmonies while he played acoustic guitar and she switched between guitar and fiddle. Their music was sort of a cross between folk and soft pop and didn’t have a whiff of the authentic, gritty storytelling that was to come from Earle’s set, though it seemed much more appropriate for the atmosphere. 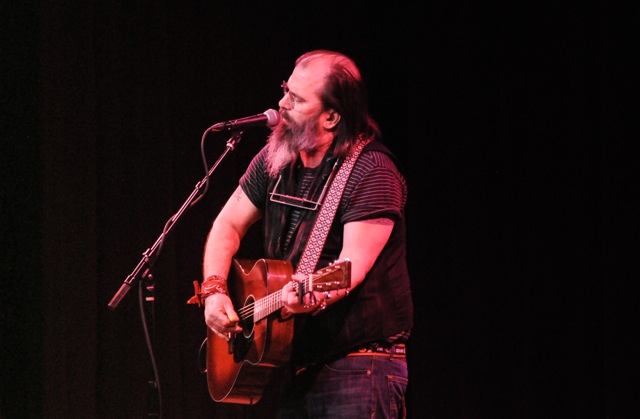 Earle did a solo acoustic set that was probably more fitting for the venue than a raucous full-band one with his killer group the Dukes would have been. It was an opportunity to see the authentic country outlaw in a super intimate setting, and he rewarded us by telling the stories about what inspired the songs he played, giving glimpse into his own songwriting process.  Though he was without the Dukes, Earle still played several songs from his new blues record, Terraplane, and spoke about how significant it was for him to make an album of blues songs. He opened the set with “Ain’t Nobody’s Daddy Now” and played “You’re the Best Lover I Ever Had” as well. Through the evening he accompanied himself mostly on acoustic guitar, with occasional contributions from harmonica and mandolin.

He said that making a blues album was particularly significant to him because of his Texas roots and the blues greats he had the chance to see growing up there. “The most important thing was what the blues are to me, because it’s my fucking record,” he said to laughs, but he did go on to give some unconventional definitions of the blues — “the blue in bluegrass is the blues” — that served to show how steeped in various American music traditions Earle has been throughout his long career. The set went from blues to country to ragtime to folk to Celtic music with songs Earle had written during a 40-year span.

There were songs from the new album, but also plenty of old favorites including “Galway Girl,” “Fearless Heart,” “The Devil’s Right Hand,” and the classic “Copperhead Road.” The day happened to be Earle’s mentor Townes Van Zandt’s birthday, and Earle spoke about Van Zandt’s lasting influence. The Mastersons came back out onstage to join him in the duet “My Baby’s Just As Mean As Me,” which Earle said would be the duet on his next record. The show closed with “Comeback Woody Guthrie,” which Earle prefaced by saying he would’ve been in Selma, Alabama celebrating the anniversary of Martin Luther King, Jr.’s march if it hadn’t been for this show. 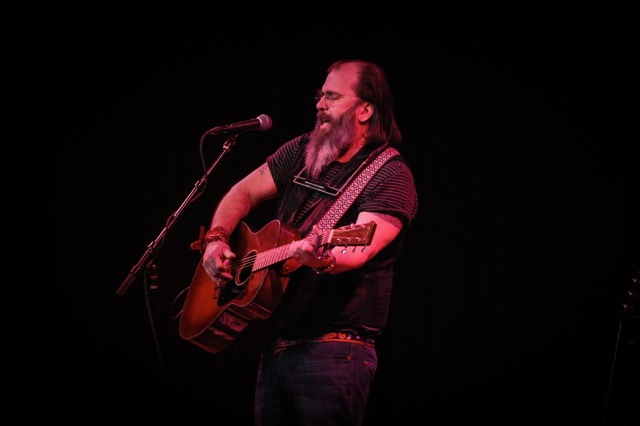 Perhaps my overly liberal college education has made me too sensitive as my father often tells me, but I couldn’t stop thinking about the homeless shelter we were all directly next door to, the homeless shelter that probably isn’t long for this world with a complex like City Winery going up next door. I also couldn’t stop thinking about the fact that at one time in his life, and perhaps even now, Earle had more in common with the people over at the Nashville Rescue Mission than he did with the folks at City Winery clapping politely at the end of each song.

The song “South Nashville Blues” was so indicative of this dichotomy. Earle explained how the song was about his days living addicted to drugs on a side of this town that the people in the crowd likely have never even been to. The song was also about the people existing just outside the walls of the venue we were all sitting in. Hearing that song in that venue located in that spot was like a huge metaphorical representation of Old and New Nashville violently clashing. Only time will tell how that fight is going to shake out, but I wouldn’t be surprised if the Rescue Mission has been turned into pre-fab condos by the time Earle’s touring on his next record.