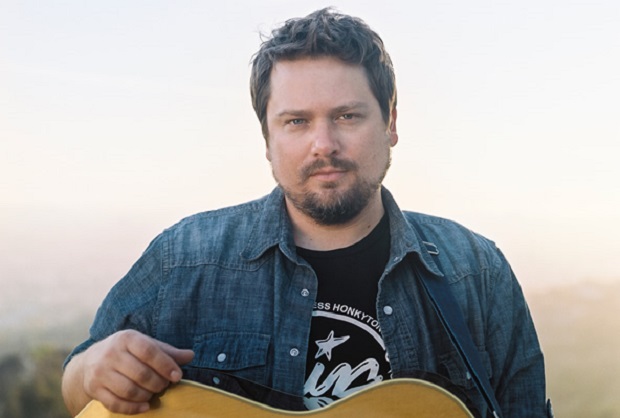 After being stranded out of town last week and then returning to find several canceled shows, I was glad that the Sean Watkins and Jill Andrew‘s show at The Basement would go on as scheduled.  It was also an early show which, given the weather, was an added bonus.

Keep reading to hear more about these two performers.

I arrived at The Basement a little before the scheduled start time, so I was able to grab a beer and seat at one of my preferred spots.  Jill Andrews took the stage with just her guitar a few minutes after 7 to a relatively full house that continued to grow.  She kicked off with “I’m Not Okay” and “Blue Sky,” which included some fine “whoo whoos” and “whoa whoas.”  She then proceeded to tell a story about a touring with a famous songwriter who asked what the “whoa whoas” meant.  Her response was that she didn’t know, but just liked singing them, which seems like the perfect explanation.  The next song was “Blue Eyes,” which was written about her son, Niko. Andrews provided some friendly banter during her set, including an explanation for her stylish gloves which apparently began the day as socks.  At one point, she asked the crowd for some help remembering the first line of the next song, which also provided an opportunity for her to pause and drink her whiskey.  She has had several songs featured on television, and I could easily see why as I listened to her well-received and very personal 8ish song set.

After a short break, Sean Watkins began his set accompanied by Tyler Chester (also in Fiction Family) on bass and Dominique Arciero (Lunabelles) doing background vocals.  I’d gotten in a few listens of Sean’s newest album, All I Do Is Lie, so I was looking forward to hearing them performed live.  Watkins admitted that, in retrospect, releasing the album in the middle of the Nickel Creek tour may have been a mistake.  After a couple songs from the new album, the trio added a drummer for “Damaged,” one of a few Nickel Creek songs they performed.   Next up were “Since the Day that I was Born” and “Guilty,” before Sean did a solo version of “21st of May,” which he’d written about the California preacher who had forecast that as the date of the rapture.  The others rejoined Sean for a couple more off the new album (“Made for TV Movie” and the title track) before Dominque took the lead vocals on a song “Always Emily” (I think).  Sean and Tyler did “The God You Serve,” and the band did a few more songs before finishing with “Somebody More Like You”.  Surprisingly, the crowd thinned a bit during Sean’s set, which may have been due to cold weather and dicey road conditions, but the good news is that a very talkative group (possibly a bachelorette party) were among those who left early.  Regardless, the new album is excellent, and it was great seeing Sean Watkins in the intimate setting of The Basement.