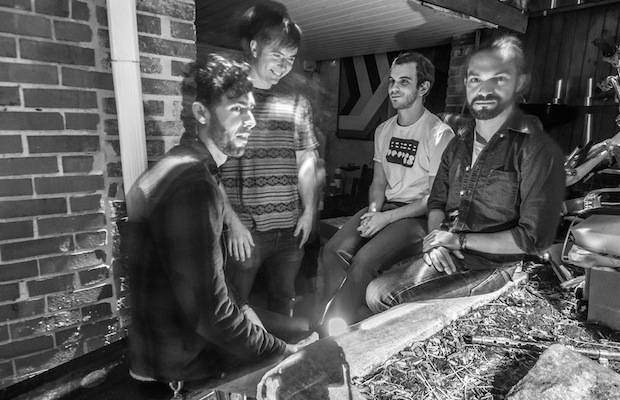 As of this morning, The East Room is still planning to host a solid rock show that should garner some consideration even on this cold and snowy winter eve.  DC rockers Paperhaus are rolling through in support of their acclaimed self-titled debut.  Local rockers, and blog faves, Tesla Rossa and Earl Burrows will round out this bill that is sure to keep the crowds dancing and the body heat flowing.

Things get started at The East Room around 9pm, and tickets will only run you $5.  Read on to find out a bit more about the bands, and have a listen to some tracks to see why we are so excited about this show.

Paperhaus have become a common name in the local scene in the nation’s capital over the past five years, but the highly anticipated self-titled debut LP (released Feb. 10th) has everyone from NPR to Stereogum clamoring.  A spirit that is clearly rooted in punk and post rock intertwines psychedelic pop and krauty prog rock for what is a very enjoyable listen.  With songs like “Misery” stretching to nearly 8 minutes, the album doesn’t leave you longing like many of today’s rock / punk records, and it’s excellently crafted songs will provide a little something for fans of everything from Television to Interpol.  Have a listen to the atmospheric yet driving rock track “Untitled” below to get a taste of just one of their many flavors.

We’ve been on the Tesla Rossa tip for a couple of years now, and their self-titled debut, which released in late 2014, has certainly gotten it’s share of spins around the No Country haunts.  Speaking of haunts, have you seen their newest video for “Mythicaluv” that premiered within the past couple of months?  It’s below for you to get familiar.  This show will likely act as a warm up for the band’s upcoming Road To Bonnaroo performance on February 23rd, so you can be sure that they will be judging the crowd’s reaction to chose their three songs for that competition on Monday night.

Earl Burrows may still be a relatively fresh name around town, but, while the band continues to grow, the founding members are accomplished and established musicians.  Frontman and guitarist, Mark Watrous, cut his teeth on the road with the likes of The Raconteurs, Brendan Benson, The Greenhornes, Karen Elson, Shudder To Think, and most recently, The Shins.  If that pedigree isn’t enough for you, then you just need one listen to tracks like the instantly catchy, hook laden “Hey Me Isreali” below to plant your ass firmly on the Earl Burrows bandwagon.

Paperhaus, Tesla Rossa, and Earl Burrows will perform Monday February 16th at The East Room. The show is 18+, begins at 9pm, and tickets are available for $5 at the door.