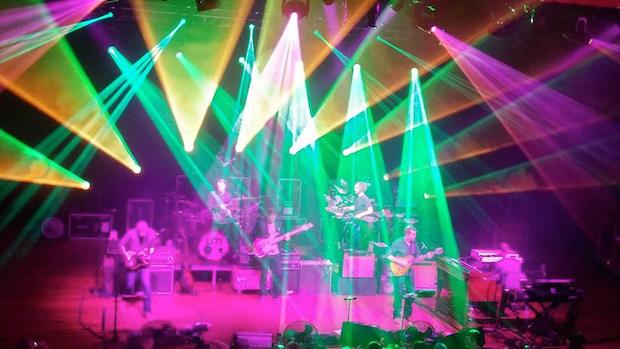 “An evening with Umphrey’s McGee” – such a pleasant way of saying you are going to receive a good old fashioned face melting. Who would have ever thought a “jam band” could sell out a Friday night show in Nashville, Tennessee, at the famed Ryman Auditorium? Well, Umphrey’s McGee did just that. Here is the catch though, Umphrey’s McGee are not just a “jam band.” They are a rock band; an improvisational, progressive rock band, who explore everything from jazz to country to metal.

At Umphrey’s McGee’s first show at The Ryman in 2012, guitarist/vocalist Brendan Bayliss opened up and said, “We’ve been coming to this town for 14 years, and the first few times we came here we got our asses handed to us.” Last Friday marked only their second appearance at The Ryman Auditorium, and, this time, Umphrey’s McGee made sure to return the favor. Head below to see what we thought of the full show.

I am proud to say I caught both of Umprhey’s Ryman performances, and, even though this night upped my overall count to 15, I am far from being a true UM veteran. I have friends who have tallied 50+, met people who have seen 100+, and even encountered one fan on his 1000th show at The Tabernacle in Atlanta while I was in attendance for a five night New Year’s run. For the record, Umphrey’s just recently played their 2000th show. Let all of that dedication sink in. The coolest part about these fans/friends is that they welcome you with open arms when you decide to join the club, because they all love the same thing: the music.

I took my seat. The lights dimmed, and “light artist,” Jefferson Waful, in his straw hat, got to work. Umphrey’s launched into the show intro with “Catshot” into “Mullet (Over),” the former a hard hitting rocker, the latter a country jam showcasing Brendan Bayliss’s cowboy boots and Jack Cinninger and the rest of the band’s versatility and ability to rival any pickers down on Broadway. They quickly decided to visit their most recent 2014 studio effort, Similar Skin, with “Educated Guess” and a personal favorite of mine, “Puppet String.” “Puppet” hits you in the gut, making you reflect on your life’s path with the last line: “How much time do you think you have? Are you prepared for what comes next?” They hit us next with “Alex’s House,” a deep cut I was unfamiliar with from The Bottom Half, and now it is a new favorite as well. Umphrey’s took that into “Snake Juice,” one of their playfully named segue jams into the first of two covers for the night, The Beatles’ “I Want You (She’s So Heavy).” The band paused to let the audience roar and bang on the pews for what seemed like hours after the opening lick before continuing. Umphrey’s could probably be the best cover band in the world if they wanted to go that route. Another segue type jam, “Eat,” followed, and then an acoustic guitar was brought out, always an interesting moment, for the track “Rocker.” It is that song to me where you are like, “This is one of my favorite songs, but I will never ever hear this performed live.” It was perfect. Then they had the audacity to crank up the heat with a 15-minute “Rocker Pt. 2” to close out the first set and leave you wondering if you could even handle a second set.

Whenever Umphrey’s kicks off their second set for the evening, it is like flipping the album over to side B and revealing a kick ass track. They kicked off set two with the opening track from Safety In Numbers, “Believe The Lie,” stretching it out to almost 12 minutes. They followed with one tune I actually predicted for the night (and another favorite), “Booth Love,” again stretching out to over ten minutes. What happened next is where the real magic took place for the evening: Umphrey’s transitioned into “Nothing Too Fancy,” a classic I had waited until that evening to finally hear. The next five songs were sandwiched in to that final jam. The first layer of that tasty sandwich was another classic from Safety, “Women, Wine, & Song.” According to UM, those three will all make life move along to a lovely beat, no disagreeing here. Next up was “Den,” which I thought and was really hoping would be a cover of Coldplay’s “Sky Full Of Stars” (That would have been cool. I do not care what anyone else says. Consider that for your next cover, guys). Then, we got the real cover from one of the few bands in my opinion who could upstage The Beatles. It was Led Zeppelin’s “Kashmir.” Again, the cover was perfectly Zeppelin and perfectly Umphrey’s all at the same time, featuring backing vocals from drummer Kris Myers, who is arguably the best vocalist in the band. Safety was featured one final time with an old favorite, “Intentions Clear,” along with Cinninger and Bayliss’s harmonizing and dueling guitars. Finally, we got one last breath of fresh air with a peaceful seven-minute “Glory,” right before diving head first back in to the closing of “Nothing Too Fancy” to slap on other slice of bread and cap off the second set.

You mean we only got 1 encore song? Oh, it was “All In Time” with a “Jimmy Stewart” signaled by Bayliss’s line- “The conversation started something like this. You want a cigarette? I said I’m trying to quit.” To me, this is Umphrey’s McGee’s signature tune, and it was the perfect ending to a perfect show. “I’ll tell you about my head, but you know what instead? I’ll tell you when your answer comes in time.”

Umphrey’s McGee is the epitome of everything that is right within the music world, and tonight’s show further supported that. They are masters of their craft in both respects of musicianship and showmanship. You would be hard pressed to find a better group of six musicians having more fun on the same stage, in the same band, than Ryan Stasik, Andy Farag, Kris Myers, Joel “Goldside” Cummins, Jake Cinninger, and Brendan Bayliss. And, most importantly, they make their fans feel like they are a part of the show and the band. That is all it really boils down to anyway. Umphrey’s McGee has a lot of gas left in the tank, and I doubt they are letting off the throttle any time soon. See you at the next one! \mm/

P.S. Go see TAUK! They have been opening/playing the after party for Umphrey’s on this tour, and they destroyed Acme after the show. They are going to be the next big thing in the jam scene.