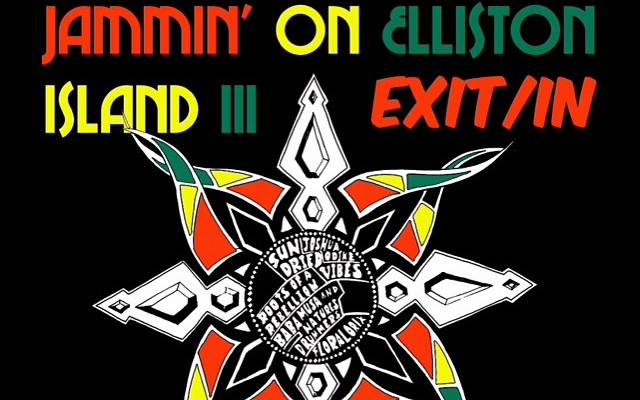 Tonight marks the third installment of Jammin’ on Elliston Island, a quearterly reggae show put on by local troubadours Roots of a Rebellion over at Exit/In. The show tonight will also feature Sun Dried Vibes, Floralorix, Jo’Shua Odine and Nature’s Drummers, and is only $10. Additionally, the event has partnered with the Second Harvest Food Bank of Middle Tennessee, and fans who donate 10 cans of food (or more) may attend for free.

In anticipation of this exciting performance, we took the chance to sit down with Roots of a Rebellion’s (henceforth ROAR) singer, Austin Smith. We talked about life on the road, playing with legendary acts, and a whole lot more. Check it out after the jump!

NO COUNTRY: Earlier this week (on Feb. 4), you performed with popular reggae act Passafire. Care to tell us about that?

It was awesome. It was a Wednesday night in Birmingham, where we haven’t played in a few months, if not four or five. [Passafire] hadn’t played there in a couple of years, but there were a good 50-60 people there, really getting down. It was awesome vibing with Passafire; they’re all really good dudes, really helpful, and great musicians.

Just the week before that show, you guys got to play with iconic acts Rebelution and Katchafire. How was that?

Yeah, we got to play with them at Marathon [Music Works]. That was sweet, and the same thing: those guys were super chill, super good dudes.

Sounds like ROAR are having a pretty good week then.

Yeah man, it’s almost too good to be true. It’s kind of surreal. They’re all bands that I’ve listened to and have affected not only my music, but really my life. Now being able to meet with them, hang out with them, have them listen to our music and vice versa – it’s pretty cool, I’m not gonna lie.

Based on what we’ve seen, the reggae scene here in Nashville has come along quite a ways, and you guys seem have been a big part of that. Would you concur?

It feels good to hear you say that [laughs]. We’ve been at it for almost five years, this summer. Nothing happens overnight, but when you do something you love and you believe in it enough to make the sacrifices, all that other good stuff is just a matter of time, really. It’s just a matter of doing it and finding the right people to do it with. People who are like-minded, willing and able.

All that hard work definitely seems to be paying off. You guys have the next Jammin on Elliston Island coming up, yes?

Yeah we’ve got Jammin on Elliston Island on Saturday [,February 7, and] it’s just $10.

What else does the band have coming up?

We just got announced on the Waka Winter Classic at 12th and Porter on the 21st. We were one of five bands selected, and the winner of that gets to play Wakarusa this year, so that’s definitely next in our sights after Jammin on Elliston Island.

Last year, in 2014, you played 110 shows. What’s it like getting to do something you love on such a regular basis?

It feels great, it’s honestly a dream. It’s a constant ride or journey filled with ups and downs, and every night is different. Some nights, you’ll be expecting one thing, and you’ll get thrown a total curveball, sometimes in a good way and sometimes in a bad way. But yeah, being able to play 110+ shows, it’s a total blessing. We just want to hit the road as much as we can. We’ve all got other jobs that are helping pay the bills because, well, being a six piece band and doing the kind of music we do, it’s not the most commercially viable. It is what it is.

Actually, a band we toured with in 2014 and are bringing to Jammin at Elliston on Saturday is called Sun Dried Vibes, and they tour heavily. I think they played 240 dates in 2014. I just know how busy we are with 110 shows; I can’t imagine doing double that. It’s some serious dedication.

That’s incredible, they must be quite busy.

Yeah, but the coolest part has been becoming friends with them. Being able to play and open up for bands is one thing, but being able to hit the road with a band is something else. We were able to do a couple 3-4 day runs with them at the end of last year, and we were switching up who’s riding in what van [laughs]. We got to know each other on a real personal level. It’s beautiful.

How would you describe your writing process?

It’s very communal, and also very private at the same time. Every member of band, all six of us writes – well, really all five of us, since our trumpet player Justin [Smith] writes but hasn’t really brought any to table as of yet, at least full song-wise. Everybody else is pretty much a songwriter that has full songs that have brought to table as ROAR songs. At first it was for me to sing, but now we’re getting to the point where they’re singing their own songs. They’re finding the confidence and the strength to really improve in that department, which only helps all of us to grow and develop as musicians, singers, and songwriters. That’s really the goal.

I was pretty much the sole songwriter and singer at the beginning of the band, but as we’ve grown, it’s shifted. I’m always down to sing other people’s lyrics and hear other people’s ideas. If they can feel it, I can feel it – we’re all one and the same. Now we’re at the point where everyone has 10+ songs individually, and that’s just ten thoughts they’re willing to bring to ROAR. There’s this huge sense of creativity and inspiration present in Nashville, both in Nashville in general and especially within the reggae community. There’s a fire, and it’s burning and being passed along everywhere we go, in more metaphors than one. But yeah, the writing process is very interesting, a mystery.

Do you think the shift towards a more communal writing process, rather than you writing all the songs, has altered the tone of the band?

Oh yeah, definitely. It’s totally different. In fact, we’re releasing a brand new single this Saturday for Jammin’ at Elliston. It’s a song that Jeremyck [Smith] wrote, and he’s also the lead singer on it. That’s going totally different for people; he’s had a verse here and there, just like Adam [Quellhorst] had a verse on our song “Time” off Heartifact. There’s actually four different singers singing a verse in that, but this one is all written and sung by Jeremyck, and we’re backing him up on it. It’ll be different, but I’m excited to hear how people respond to it. Live, people have been really vibing with the song and the message. It’s called “Stronger”, and it’s just about staying strong and not letting the crap of this world and this life get to me or you. We just need to surround ourselves with positive people, who will help us get through the strife.

Anyways, yes: it has really changed our sound. Even the message or direction of the band has really been changing as well. Jeremyck and Adam, the keys and bass players, are really getting serious about Rastafari. I’m only vaguely familiar with Rastafari through my passionate discovery of reggae music, but it just gives this fire that’s burning behind reggae music and always will be, no matter what anyone says. In the genre, you see a lot of jokers and clowns; people who don’t really take it seriously and approach it as the “cargo shorts chill bro” who only sings about smoking weed. I don’t know. Even though I’m not a Rasta, I definitely respect Rastafari and have a lot to learn from it. One heart, one love, one people. It’s been very interesting. If you had told me five years that we would be opening up for Rebelution and Passafire, I would have pooped my pants. We were just four friends in a basement, learning and teaching each other something new. That’s kind of been the vibe of the band since the start and it’s what’s going to keep us moving forward. It’s a transparent approach. It’s so freeing and great to be able to write our own parts, bring them to the table, and even if we make mistakes, we’re at the point now where we don’t even really need to communicate those mistakes. Everyone knows what they need to correct individually, and we do it accordingly.

That sounds like a great band dynamic. Thanks for taking the time to talk with us. Is there anything else you’d like readers to be aware of?

Just that Tennessee reggae is on the rise. A lot of people think of Nashville as country, blues, or even indie rock. We’re here to say that Music City holds all kinds of music, and we’re happy to represent another side of it. It’s not just reggae, but it’s definitely rooted in reggae for this community. We believe reggae is the king of music, and the most spiritually uplifting kind of music. So yeah, if I wanted readers to be aware of one things, it’s that.