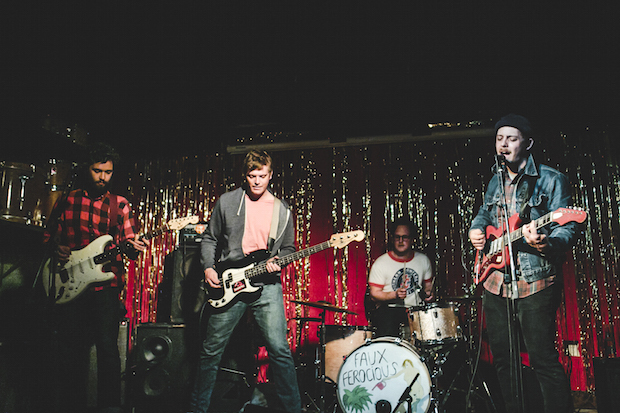 With a billing like ‘Babes in Boyland: a Benefit for Planned Parenthood,’ we had a good feeling it was going to be a great showcase. When we saw the line-up, featuring garage punksters Faux Ferocious, gritty southern rockers Thelma and the Sleaze, and singer songwriter Cory Chisel (w/ Adriel Denae) we knew we had to be at The Stone Fox.

For just the cost of a donation, to an important cause, the evening of awesome tunage could have been all yours. The crowd was thick, so many of you were there, but if you missed it, we have a full review for you after the jump. Be sure to check out the always stellar work of contributing photographer Jake Giles Netter, and stay tuned to No Country for all things in Nashville that rock.

Another cold, grey and wet January night is still not a good excuse to miss out on a great night of live music. You still have to get out there, enjoy life, crap weather misery or not. We parked the car, made our modest donation at the door like everyone else and ordered a round of beers at the bar. It always feels nice to know that you can get drunk, watch some great bands live and help a good cause … all in the same night! 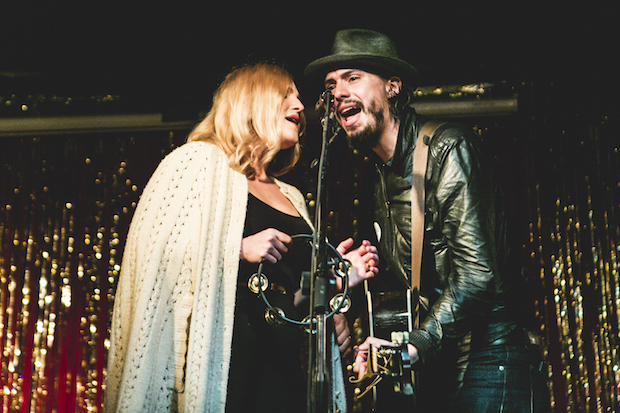 The first act of the night was husband and wife duo Cory Chisel and Adriel Denae. Their stuff had a mellow folk feel, with pitch perfect vocal harmonies. They went through some songs together, and Cory did a few himself. The whole way through, we were most impressed most with the song writing. After their short but sweet set, a speaker came out to talk on behalf of Planned Parenthood, the organization our ‘cover charge’ went to. She spoke about a women’s right to choose and spoke out against the passage of Issue 1, important topics we can all learn more about right here. 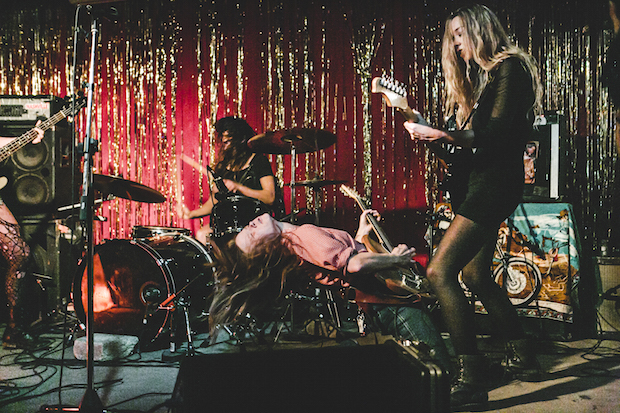 Thelma and the Sleaze. Photo by Jake Giles Netter.

They punched us all in the mouth with a Ramones inspired, but less poppy, punk riff. Lead singer/guitarist LG is bundle of raw energy who looks a little like Janis Joplin, but plays more like Ted Nugent or Angus Young. Bounding around stage, fading more into heavy southern rock inspired licks, she’d slide to her knees and not miss a note, and later even took it to the table tops, melting skulls along the way. Grungy bass lines, fast drums, and ambient backing guitar weaved a tapestry of awesome.

“How are we on time for butt sex?” she asked the sound board guy. “Well titties and pancakes! I should have known you were all business man, you’re wearing a blazer.”

They blasted through the song, then did a quick jamboree style number, before shredding one more heavy track, leaving new fans (like myself) in their wake. True to their moniker, they kept it sleazy, but there’s much more to this all-female power house than just schtick. Go see for yourself and I imagine you’ll be just as impressed as I was. 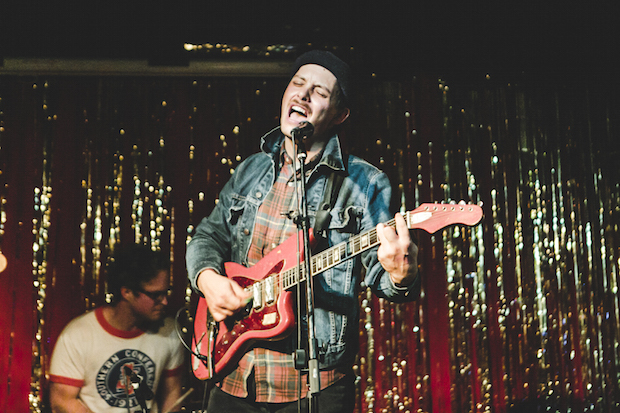 We’ve been hearing buzz on Faux Ferocious for awhile now, and we’ve caught them before, in various opening slots, but we were excited to see what they did as top billing. They plowed through an inspired set of shred punk/distortion rock that reminds me a little of Parquet Courts, but less nerdy. They went right in and out of songs, no fucking around, men on a mission. The playing was never rushed though, a jammy abstract session at times, that faded in and out of different rhythms with flawless effort. Another must see local band you need to check off your list sooner than later.

After they wrapped it up, we hightailed it back to the truck, and out of the rain. Shitty weather or not, it’d been a great showcase, and Jake took some amazing photos you need to peep below. If you’re already kicking yourself for missing out, check back with No Country soon for more on all three acts, and find out what they’re getting their filthy little hands into next.