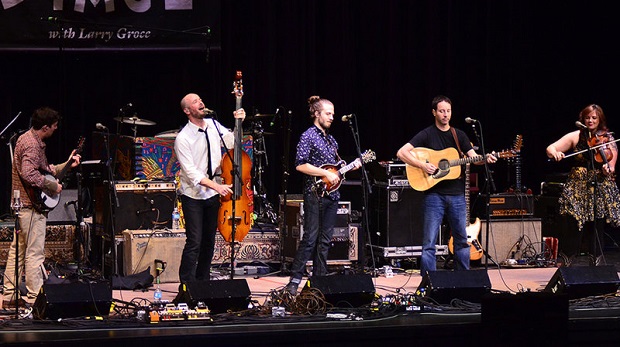 Truth be told, the Cannery may not be my favorite venue in Nashville, but it was the perfect place for Friday night’s Yonder Mountain String Band and Horse Feathers show.  I don’t know if it was a sell out but there were folks in most every nook and cranny of the place by the middle of the show.

Despite my best intentions, I arrived a couple songs into Horse Feathers’ set. The place was maybe half full by this time and some of the crowd was just kind of milling around so I was able to work my way up to the stage, maybe two or three deep. As detailed in our preview, Justin Ringle (Guitar, Vocals) has been performing under the Horse Feathers moniker for a while, but the current line-up also includes Nathan Crockett (Violin, Mandolin, Saw), Dustin Dybvig (Drums, Piano) Brad Parsons (Guitar, Banjo, Mandolin, Vocals) and Mayhaw Hoons (Bass).  I didn’t catch all the song titles but know there were a few off of the most recent album, So It Is With Us.  I definitely regret not catching their whole set, and plan to arrive early for their show at the High Watt in March.

Yonder Mountain String Band kicked off their set at about 9:15 and the room was pretty well packed by that point. They opened with “Dominated Love Slave” which segued into “Fingerprint” to “Robots” and then back to “Fingerprint”, something they would do several more times throughout the evening. After a couple more songs, (Dylan’s “Spanish Harlem Incident” and “Nothin But A Breeze”), we were welcomed to “an evening of traditional bluegrass” which was anything but traditional.  Someone also noted that the place was beginning to “smell like Colorado”, but we’re not really sure what that meant.  One of our absolute favorite local singer-songwriter-musician types, Shawn Camp, joined the band at that point for “Ain’t No Way Of Knowing” and then stuck aroud through the end of the first set. A great cover of “Son of A Preacher Man” was inserted into the middle of “Casualty” to close the set.

After about a 30 minute break, the band came back out a little before 11PM.  They kicked of the second set with “Looking Back Over My Shoulder” which melded into “Corona” before a cover of the Pure Praire League classic, “Amie”.  After a few songs without him, Shawn Camp rejoined the band beginning with “My Love Will Not Change”.  Nearing the end of the show, “Traffic Jam” transitioned to “Sidewalk Stars” and back. The night ended sometime past midnight with encores of “Hey Bulldog” and “Sharecropper’s Son”.  YMSB cut ties with founding member, Jeff Austin, last year but tonight’s expanded band was a five-piece with Allie Kral on fiddle and Jake Jolliff on mandolin. They were listed as “special guests” and “standout musicians” but, if they were auditioning for a full time spot, I’d say they passed with flying colors.  I am really looking forward to seeing Yonder again somewhere during the upcoming festival season.