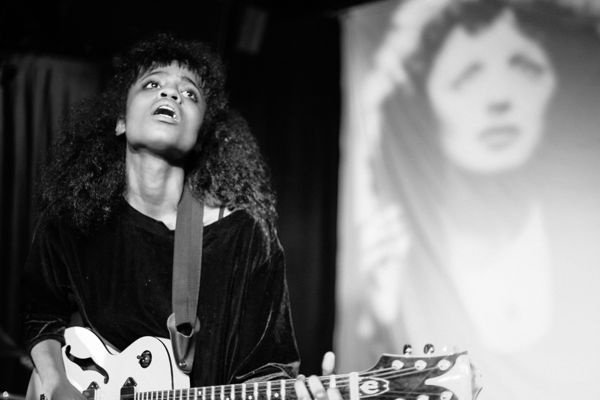 Adia Victoria is a Nashville-based blues bandleader on the verge of her big break. The only single the creepy songstress has released thus far, “Stuck in the South,” was named one of NPR’s best songs of the year, and has been getting a ton of attention from local and national press attuned to picking up on up-and-coming musicians. If you follow my articles, you know I love telling you about the women playing rock and roll in Nashville who generally kick ass, and Victoria’s dirty alternative interpretation of the blues, plus her badass swagger, make her someone that should not be missed next time she plays in town (this show was a tour kickoff, but she’ll be back).

Read on for our full review, our interview with Adia, and photos from Mick Leonardi to see what you missed out on if you weren’t there. 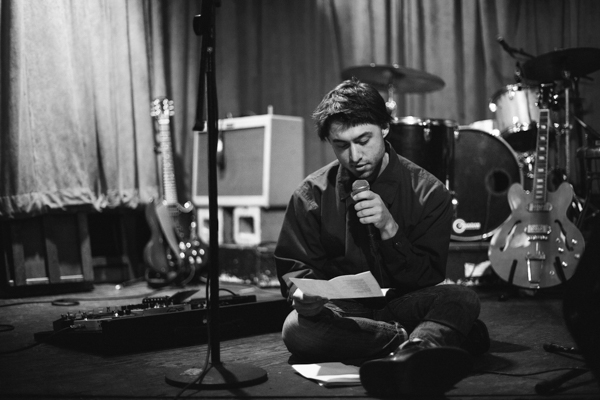 To begin the show, instead of having opening bands Adia chose to have some of her friends, all of whom happen to be well-known Nashville musicians, read spoken word poetry. Daniel Pujol of PUJOL read funny observational prose poems, singer-songwriter Tristen read some more serious pieces, and country singer Margo Price shared a short film of herself on tour in Europe accompanied by a poem she wrote. All of the musicians were clearly put outside their comfort zone in performing poetry rather than music and kept accidentally calling their poems “songs.” The 5 Spot’s revelers were also a little unsure what to do with the quiet, literary atmosphere, but this was Victoria’s intention. Victoria herself loves poetry, often shares her own on social media, and isn’t the type to give a damn if she makes someone uncomfortable. Price finished the poetry portion of the evening with a poem she wrote for Michael Brown and his mother, which was read in braille by Jim Skinner. 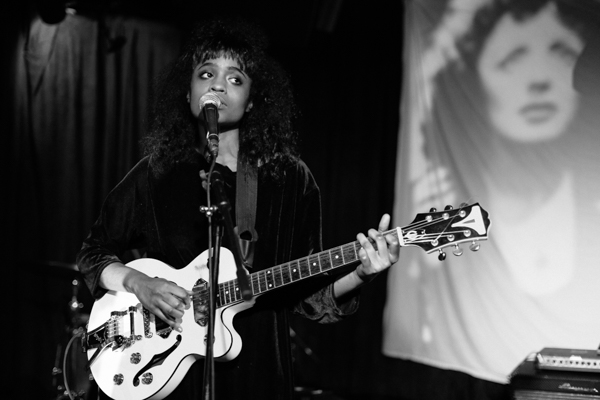 Victoria’s music is a contemporary interpretation of the traditional blues influenced by alternative and punk. Onstage she wields dark charisma and a hollow body electric guitar, but she isn’t the type of performer who won’t crack a smile. Her lyrics are rooted in those same blues traditions but are in no way simplistic, infused with high literature and folk tales, and conveying complicated messages about what it’s like to be born and raised in the South with a capital S. She beat a tom like a madwoman in a song that she said was about the Devil, sang another about the street her grandparents live on in her home state of South Carolina, and claimed “I don’t feel sad about it anymore” in the beautiful “Blackbird.” It’s believable, maybe, if that sadness was replaced by fury. Victoria ended the evening with her single “Stuck in the South,” which has had critics drooling since it’s release. “I don’t know nothing about Southern belles / But I can tell you about Southern hell,” she sings sweetly over a blues riff. 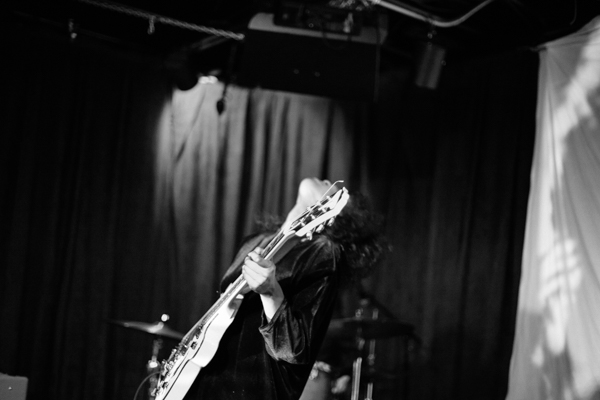 We asked Adia a few questions via email; here’s our interview with the singer.

NC: Your songs get compared to Southern Gothic literature a lot. Do you agree with that? I’ve read that you like to read; what kind of literature do you love or inspires your songwriting?

AV: I don’t know what Southern Gothic really even means. I think people have a compulsive need to identify and label the world around them, to make it a bit more digestible. It makes sense—the world’s a scary place. But I don’t cater to those labels. Presently, I am most inspired by the works of Toni Morrison and how she is able to shed light on the moments in human life deemed ‘unspeakable’. There is a power that comes from de-fanging the taboo. I also have been immersed in Lillian Smith’s ‘Killer of the Dream’. Reading this has helped me make better sense of my southern heritage.

NC: Which musicians are inspiring you the most right now as you’re developing your career as a solo artist? Which ones inspired you when you first started playing and writing songs?

AV: I’ve recently fallen in love with St Vincent’s latest album as well as D’Angelo’s ‘Black Messiah’. These two albums somewhat shook me from a creative and personal lull and challenged me against ‘pretty’ or ‘catchy’ songs. At this point in my career, I have a lot of people advising me to ‘write more hooks’. And it’s like—my music comes from my life—my life isn’t filled with ‘hooks’. At least not the singable sort.

NC: When and how did you know you wanted to make music seriously, not just as songs to play for your cat, but to play in public and tour and record?

AV: You don’t seem to want me to tell you that I was inspired by writing songs for my cat Mortimer. Well, I was. And he was my first audience for many of these songs. It’s all kind of snowballed from there. I never had a ‘Come To Jesus’ moment where I set out to be a star. I just kept playing songs and people responded and one day I was given the opportunity to record these songs and now I get to play for more people. It’s pretty simple. And it all started with playing for my cat.

NC: I’ve read that you’re a bit shy. Do you like performing? Does having “Adia Victoria” as your stage name help you create a persona who is maybe less shy? You’ve said before that this “Adia Victoria” stage persona would ruin your life if you didn’t find a proper way to channel her. What did you mean by that? Is she how you filter your anger and frustration? I haven’t seen you perform yet, but I’ve read that you can be a bit “unhinged” during shows.

AV: I wouldn’t say I am shy as much as I am rather uninterested in banal small talk which is the social plane many people feel comfortable occupying. I consciously decide to abstain from that. “Adia Victoria” isn’t a persona. It’s my first and middle name. I am not ‘unhinged’ onstage. My performance requires discipline and extreme precision, I wouldn’t be able to do what I do were I ‘unhinged’.  When I go onstage I am able to be a side of myself that most people would find terrifying at a party or a bar. Before I was performing, this side of me bled all over my life. When I was a sophomore in high school there was a boy I liked and I got so terrified at the idea of sitting across from him at the table and having to have a nice ‘normal’ conversation with him that I took a big mouthful of water and spit it in his face instead. I can’t do that in real life as a grown woman.

NC: You’re very politically active, having participated in some recent protests against police brutality and written a poem in the wake of the verdict about Darren Wilson. Do you think your music or music in general has an important role in politics and social issues? Is it important for artists to address these kinds of issues? How do you feel about musicians who try to remain apolitical and stay out of it?

AV: I think the state of our pop music, in that it seems divorced from the actual lived experiences of its audience, is very telling. There seems to be a decided ignorance on the part of musicians these days to ‘stay neutral’ or ‘stay out of it’. To me, staying neutral and all the while reaping the benefits of an unjust system is essentially giving your tacit consent to the way things are. I remember recently Taylor Swift was questioned for not taking a more socially aware stance in her music and she defended herself by saying, roughly, that people are asking ‘too much’ of her songs. That was very telling.

So, yes, I do believe that artists have a very important role to play. I remember when Kanye West infamously spoke out in 2005 and proclaimed the very obvious truth that ‘George Bush doesn’t care about black people” the vitriol he was met with. He took a hard hit professionally. But he felt morally compelled to speak the truth in the middle of the absurd. I love him for that. If you’re making art that is completely divorced from reality then you are essentially engaging in one very public self fuck fest. And shame on you.

NC: Why did you get invited to speak at Yale with Jack White and Greil Marcus, etc. about Paramount Records? Can you tell me a little bit about how that went and what you talked about?  What do the historical traditions of old blues music like the stuff that’s on those Paramount albums mean to your contemporary interpretation of the genre?

AV: They called my manager and asked me to speak. I flipped. Being invited to join Jack White, who I count as one of my main musical influences, to speak at Yale about the blues came completely out of left field. I had to have my sister join me just to make sure that I wasn’t dreaming the whole damn thing.  You can’t make that shit up. I am not some great expert on the blues. I openly admit that. But what I can tell you is that the blues are the original punk music. And the spirit that flowed through those songs—singing truth to oppression—is one that I hope to keep alive in my music.

NC: Lastly, are you working on an album? When can we look forward to a full-length from you or at least another single?

AV: I am working on an album, yes. You can expect another single soon. At my mother’s request, it will be my song ‘Sea of Sand’. She loves that song.