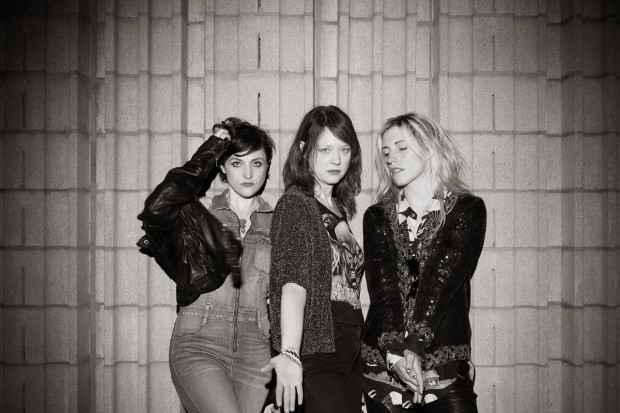 If you love female-fronted punk, then get your ass to The Stone Fox tonight for Ex Hex, the new band of Wild Flag member Mary Timony, with Idle Bloom and Birds of Avalon, and you’ll find the women onstage far outnumbering the men. Ex Hex’s 2014 debut was named by NPR as one of the best records of the year that likely went under your radar, but now that we’re telling you about them you have a chance to right that wrong and check the all-girl new wave trio out. Idle Bloom are an almost all-girl local psych band worth keeping your eye on and Birds of Avalon will compliment them with their own psychedelic-inspired sounds. Read on to find out more about the lineup.

Ex Hex is the all-female trio fronted by Wild Flag member Mary Timony, who has had a long career in punk and alternative music. You may know Wild Flag for also being the side project of Sleater Kinney co-founder and guitarist and Portlandia funny women Carrie Brownstein. Timony has also been in the bands Helium and Autoclave, though her current focus is fronting the new wave and ’70s punk influenced Ex Hex. The band’s first album, Rips, came out in October of last year, and was on several publications’ lists of the best records of the year that slipped under many people’s radar.

Birds of Avalon are a rock band out of Raleigh, North Carolina inspired by ’70s-era psychedelia and post-rock that gained a following releasing several albums and touring with bands including the Raconteurs, the Flaming Lips, and Mudhoney. Their latest EP, Disappearance, comes out at the end of this month, but, according to social media, they’ve been taking copies to their recent shows, so you may be able to scoop one up at this gig as well.

Idle Bloom is the local psych pop rebirth of the group Fancytramp consisting of three girls and one boy that have been compared to Jenny Lewis and the Smashing Pumpkins. While we said we would miss Fancytramp, Idle Bloom has risen from the dust to make another new band we’ve been digging since they opened for Tipper Whore’s final show.

Ex Hex, Birds of Avalon, and Idle Bloom will perform Wednesday, January 7 at The Stone Fox. The show is 18+, begins at at 9 p.m., and tickets are available for $10.