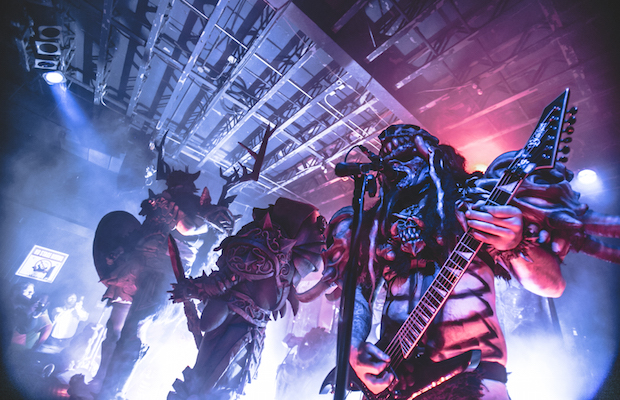 Earlier this year, legendary shock/performance art/metal act GWAR suffered one of the greatest tragedies a band can endure: the sudden and unexpected death of frontman and founder Dave Brockie, better known by his stage name Oderus Urungus. For most bands, especially club-sized acts like GWAR, this would be the end of their career. GWAR are not most bands however, and, with the help of a revolving stable of new vocalists, an added chapter to their already bizarre and beloved mythology, and one badass viking funeral, the group have pushed forward, returning to the stage with a small tour to test the waters. Likely because of Brockie’s absence, the band are playing smaller than usual spaces in many markets, and, as a result, brought their over the top antics to 400 cap Nashville haunt Exit/In. We were there to witness the packed, rowdy fiasco, which also included Corrosion of Conformity and American Sharks. Check out our take and photo set after the jump! 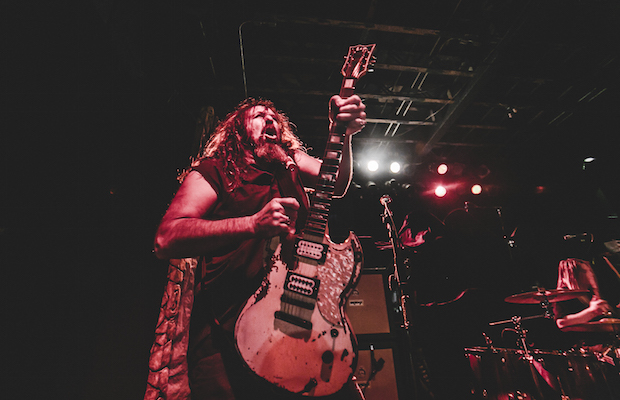 Worn out from a Thanksgiving vacation and juggling another press function, I arrived too late to catch the opening acts. Both are great and greatly different metal and hard rock groups, American Sharks, a younger band, representing a more retro sound, and Corrosion of Conformity, a long-running act like GWAR, boasting a sludgier, thrashier style. And, while I would have very much enjoyed catching them (I’m told both bands rocked hard), GWAR were the main reason I made the trek, and are, without a doubt, an unparalleled and unrivaled performance experience. Cramming the stage with a literal truckload of gear (and likely having to downsize a bit in doing so), GWAR are the only band who’ve ever necessitated that the Exit/In remove their wall art in my several years of attending shows there. The room was packed as I stepped in, attempting to secure a good vantage point without slipping into the range of blood spatter, and full of fans of all walks of life, many of whom didn’t seem like the regular show-going type. My photographer joked that we looked like the only two people in the room without criminal records, and, while they might not be totally far off, the range of GWAR’s appeal to a diverse array of fans was definitely impressive. Decked out in their alien meets battle armor and costumes, the band opted to decapitate a prosthetic security guard, before launching into bombastic opener “Fly Now.” 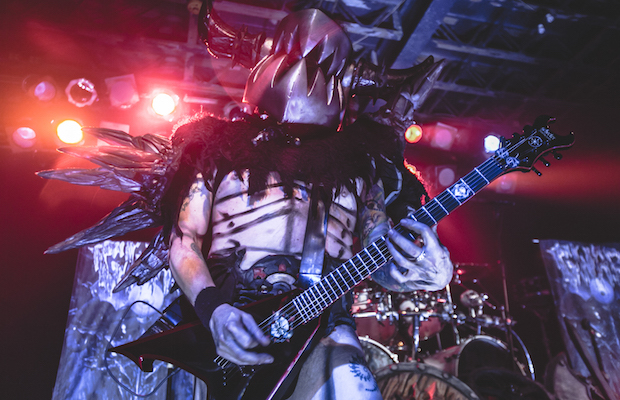 Admittedly, I’m a bigger fan of the GWAR experience than a fervent listener of their albums, but, as a casual fan and genuine admirer of metal, I have the utmost respect for their artistic prowess, an attribute that often gets overlooked. The gents (and lady) of GWAR can legitimately shred, and, theatrics aside, delivered one of the tightest, heaviest sets I’ve seen in Nashville in recent memory. But, sure, music out of the way, it was all about the show, and this one revolved heavily around the loss of Oderus. At the start, a hologram of the fallen frontman lay floating in something of a makeshift shrine, and, as the show progressed, its general narrative focus was a “search for Oderus, who was somehow stuck in another dimension.” Attempts to retrieve him brought forth monsters and mutants to disembowel, a clever and dark way to joke about and explain his passing, and even an appearance from his famous prosthetic, blood ejaculating penis, “the Cuttlefish of Cthulhu” (there’s a deep mythology about all of this stuff which you can easily find online, if you feel like falling down that rabbit hole). Stepping in to fill the singer’s absence were various GWAR regulars, as well as the return of former bassist and de-facto new frontman, Blothar (Michael Bishop, and former Beefcake the Mighty) and new, female vocalist Vulvatron (Kim Dylla). Dylla, whose terrifying and dangerous energy was a delight to witness, is an especially welcome addition to a historically boy’s club and often crudely sexist (er, all in good fun?) band, and she proved to be every bit as badass and the rest of the crew. 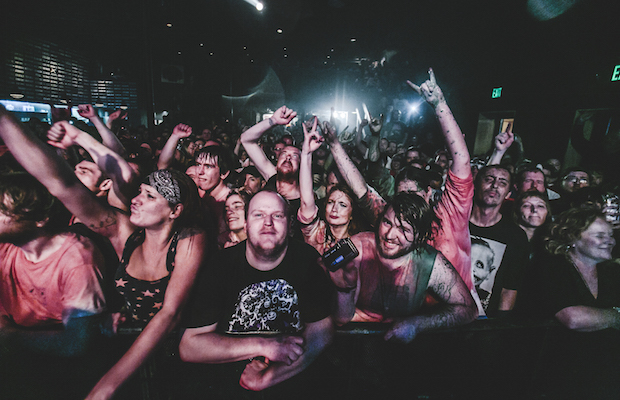 Performance highlights included fan favorites like “Saddam a Go-Go,” “Horror of Yig,” and  “Let Us Slay,” but only because of the insane crowd response. My personal highlights were the disembodiment of a mutant boob monster, battling a giant, and pretty much any time Vulvatron was on stage. Oh, and a course the copious amount of blood, alien ejaculate, and various other bodily fluids spilled all over the crowd. At this point in their career, GWAR know what they’re good at, and stick to it. They might be a shock upon first viewing, but, if you’re in the know, their show is one of the most fun, intense, and metal experiences you’ll ever have. Despite their unfortunate loss, I hope to see GWAR carry forth for many, many years to come, though getting to see them in a space as small in Exit/In will be hard to ever top.