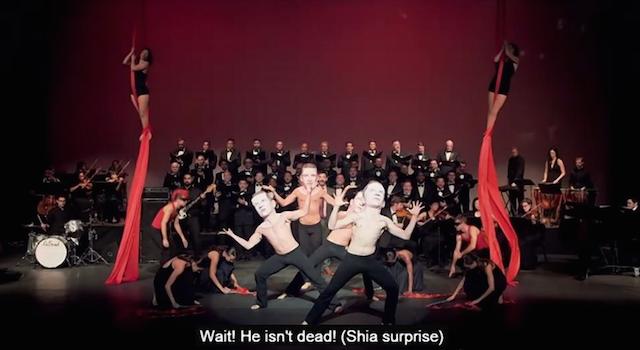 Hey there happy Hump Day-ers! It’s the eve before Turkey Day and if you’re counting down the minutes until you can climb into your sloth onesie and blame the tryptophan for your coma-like hibernation… we feel ya. (That turkey makes you sleepy thing has been debunked, by the by, but whatever.)

Chances are, you, like the rest of us, are gonna’ be forced into awkward small talk with folks you are somehow related to and yet barely know. What can you talk about? Why you’re still single? Why you bring your same sex “roommate” to every family gathering? Nah, you’re gonna’ want a “safe zone” of convo… free of topics of religion, politics, and your sex life… so why not bring up Actual Cannibal, Shia LaBeouf?

This epic performance art/comedy extravaganza finds Rob Cantor returning to his 2012 Meme-worthy spoken word-ish song/story of an epic battle against Shia LaBeouf, the savage cannibal. The internet launched Cantor’s creation of the “Actual Cannibal” into the inevitable gaggle of .gifs and Tumblr shrines devoted to its absurd hilarity and now… two years later… we have the live version in all its aerial, masked interpretive dancing, choral glory. PLUS: There’s an actual cameo by the actual cannibal.  Guys, we owe our fearless editor here at No Country for tipping us off to this most epic of diversions… gives thanks for Mr. Hall and jump already! [Editor’s Note: passing the hat tip along to Wells Adams of Lightning 100]

Yep. Forget “Grandma Got Ran Over By A Reindeer” — and watch out for Superstar Actual Cannibal, Shia LaBeouf this holiday season. Now email it to all your cousins so you can have an inside joke that will irritate all the old people in the room.