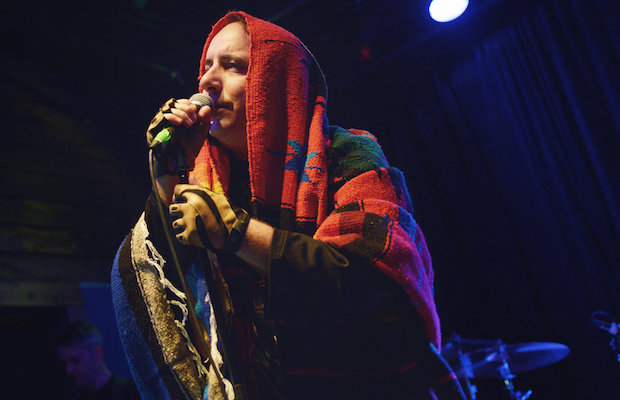 Former child star Macaulay Culkin and his band/performance art collective The Pizza Underground stopped by The High Watt last week to play pizza-themed covers of classic Velvet Underground compositions, utilizing instruments like pizza boxes, kazoos, and toy glockenspiels, accompanied by visuals projected by a man who goes by Anchovy Warhol, and proceeded by a dozens of free pizzas being crowd-surfaced across to the room thanks to local NYC-transplanted pizza outpost, Two Boots. While that sounds very much like the setup for a bizarre Saturday Night Live sketch, it was, in fact, the way we spent last Wednesday. Adding to the zany, amazing night, Moldy Peaches guitarist Toby Goodshank kicked things off with a pizza-themed set of his own, flamboyant candy obsessed boyband Candy Boys warmed up the stage, and beloved indie/dance rock/r&b singer Har Mar Superstar finished out the night as a co-headliner. We recounted all of the numerous antics as best we could below, but, if you missed out, you really missed out.

Accompanied by members of The Pizza Underground and Har Mar Superstar (including Har Mar himself, Sean Tillmann, on bass), former Moldy Peaches guitarist Toby Goodshank opened the show. Not even realizing that there were openers, it took me a few minutes to figure out what I was watching, and, while the numerous band member collaborations and increasing weirdness throughout the night has me a bit fuzzy on Goodshank’s short set, I believe that it, like The Pizza Underground, drew influence from pizza and parody. Backed by projected visuals under the helm of Anchovy Warhol, Toby and co. set the tone for what would be one unforgettable evening.

Within minutes, act two, a New York duo known as Candy Boys, took the stage. Decked out in cropped, tight-fitted shirts, and donning neon leggings, the fellas served as something of a Candy Themed parody of late ’90s boyband culture, complete with spiked hair, headset mics, and choreographed moves. Also backed by visuals, which were incredibly and meticulously synced up with the set, the Candy Boys employed the use of props (including, duh, actual candy) and a hype man, but, ultimately, what helped sell their weird and hilarious show was just how committed they were to the act. Much like The Pizza Underground, Candy Boys are a band best experienced live, and one that I absolutely delighted in watching. They appear to tour on a semi-regular basis, so keep an eye out for their next Music City outing. 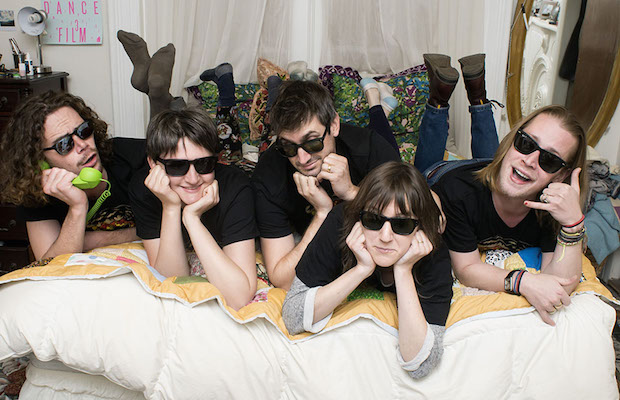 The Pizza Underground. Photo via lippemfg.org.

Sufficiently warmed up, weirded out, and ready to laugh, the crowd had crown fairly sizable by the time The Pizza Underground arrived. With pizza-themed visuals projected during changeover, anticipation had grown, and, as they took the stage, singer/percussionist/kazoo player Macaulay Culkin greeting us with “Hi kids! Do you like songs about pizza?,” the band proceeded to pass out stacks of fresh Two Boots, to fill our stomachs and to properly kick off the best pizza party of my life. While we, unfortunately, were barred from taking photos, we planted ourselves to the front, while Pizza Underground piled onto stage in a line. Not exactly a joke, but also not a particularly serious musical act, I was relieved to see just how light-hearted the group’s delivery and banter would be; at one point, they even mocked their lack of a technical approach amidst a city full of musicians. For some reason, I expected Culkin to be quiet and in the background, but, to my delight (and certainly to the delight of his fans, who accounted for a faction of the crowd), he was incredibly talkative, friendly, and engaging, quick to admit that his band is just something of a fun, goofy, piece of performance art.

Working their way through familiar tracks like “All the Pizza Parties” (“All Tomorrow’s Parties”), “Pizza, It Hurts” (“Venus in Furs”), and “Take a Bite of the Wild Slice” (“Walk on the Wild Side”), The Pizza Underground’s set was even longer than expected, and included several new songs that the crowd went wild for. In addition to the Velvet Underground heavy tunes, the band also let us in on a few inside jokes, including cat-themed covers of Billy Joel tunes and poop themed odes to Bob Dylan classics. Additionally, they took a mid-set break to allow their bassist to transform into a Kurt Cobain-esque character, to perform a medley of Nirvana songs in the past tense. While this all, on paper, sounds kind of dumb, live, it was absolutely hilarious. The jokes were just right, the comedic timing was perfect, the level of self-awareness was intact, and, most importantly, the musical talent was strong enough to sustain the parody. While they are, to an extent, a commodity, The Pizza Underground are, without a doubt, one of the most entertaining live acts I’ve seen in quite some time, and, if you don’t think too hard about what they represent, are simply just a fun, funny band. 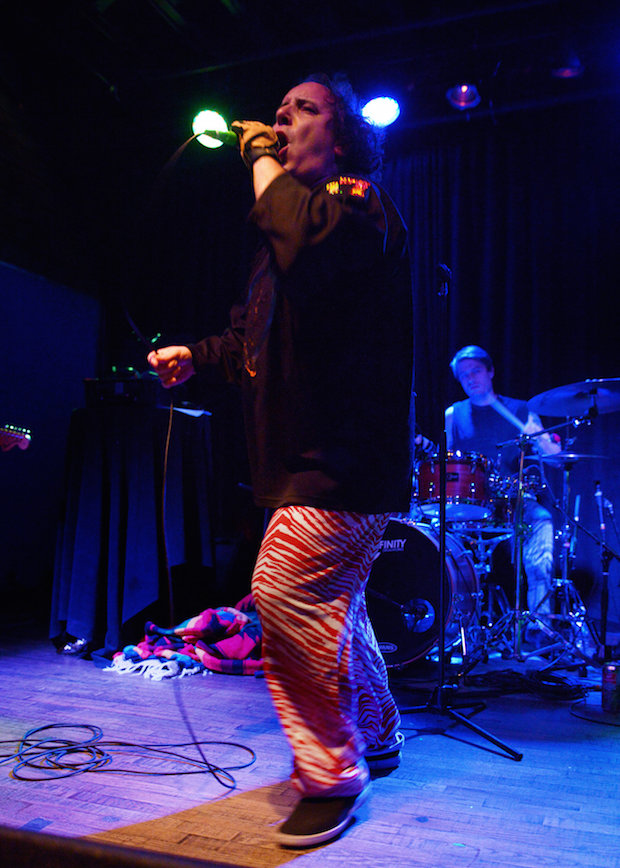 Technically billed as co-headliner, but filling the spot of “serious,” established talent on the bill, Har Mar Superstar headlined the evening, and, to my delight, seemed to have equal crowd pull. Backed by a simple three piece band and a laptop, Har Mar emerged wrapped in a shaw, and burst into a career-spanning, crowd-pleasing set. At 36, Sean Tillmann, who also goes by Sean Na Na, has been playing the part of Har Mar Superstar for around 15 years, and, as such, has all but perfected the character. Short yet spry, Tillmann worked the stage, enhancing his smooth, r&b vocal stylings with groovy dance moves and the driving, determined indie dance beats of his band. Changing his outfit to include several colorful, festive cloaks, Har Mar ultimately ended up in a gold speckled shirt that paid tribute to his latest full-length, Bye Bye 17.

While Tillman’s set alone would have been worth the trek to The High Watt, and, while his performance was by far the night’s most polished and professional, the stand out moment, if for nothing but its unforgettable randomness, was his duet with a visibly intoxicated Macaulay Culkin; a cover of The Association’s ’60s classic “Never My Love.” What started as a bromantic style vocal tradeoff quickly escalated into a full-on dance routine, Tillman and Culkin spinning each other around, seductively embracing, and even sharing a kiss. Culkin would go on to hang around side stage, getting even more into the party spirt, until every member of every group from throughout the evening returned for a improv heavy tradeoff finale. I couldn’t have asked for a more perfect cap to a more fun evening, and feel sorry for those of you who missed it. 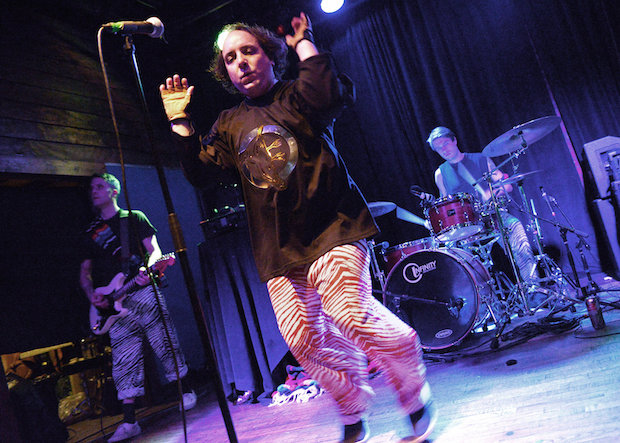 For more about The Pizza Underground, be sure to check out our exclusive interview with the band right here.