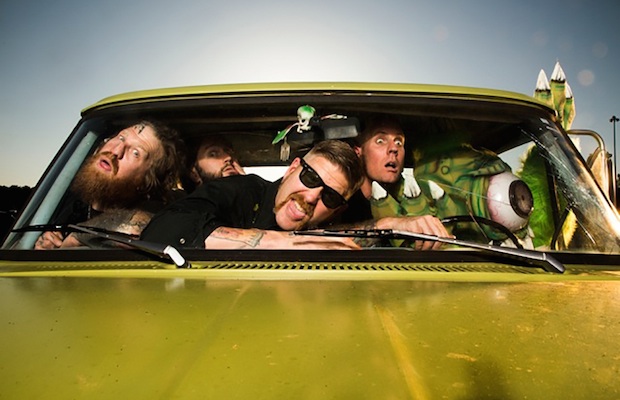 As we told you back in the summer, Atlanta metal mavens Mastodon are coming to Marathon Music Works TONIGHT, Nov. 6 with Gojira and Kvelertak in support of their killer new album, Once More ‘Round the Sun, which was recorded right here in town, and debuted to critical acclaim and chart-topping sales. Not only is this show exciting news for fans of quality heavy music, but has also one of our most-anticipated concerts of the fall. It’s not too late to grab tickets, so buy yours here and keep reading for a preview of all three acts!

Lyrically ambitious and musically unpredictable, Mastodon are a staple in modern metal, having spent their near 15 year existence  perfecting their sound, a mixture of sludge, progressive, alt metal, stoner, groove, and punk. The Atlanta group first rose to prominence with 2004’s Leviathan, and have flexed their adaptability and fluid musical sensibilities ever since. We most recently caught the band at Bonnaroo, where they delivered a skull-crushing late performance.

French rockers Gojira formed in the ’90s, and have released five impressive studio albums since ’01, developing a blend of thrash metal, technical death metal, progressive metal, and groove metal, wrapped around environmentally conscious themes. The band have a reputation for putting on one badass live show, and are well-matched to get you in the mood for Mastodon.

Hailing from Norway and adding further diversity to this impressive bill, Kvelertak are a comparatively new band, but have been making a big splash in the metal community since the 2010 release of their self-titled debut (and followup, Meir). Taking more of a black metal/hardcore approach, Kvelertak help round out the metal spectrum that will be on full display.