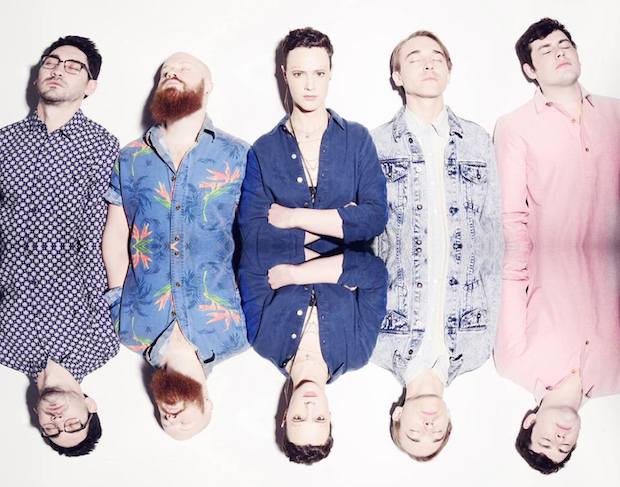 With Bleachers and Wild Cub in The Cannery Ballroom below and The World is a Beautiful Place & I am No Longer Afraid to Die next door at Mercy Lounge, New York art punk buddies Rubblebucket and Landlady had a little bit to compete with as they holed up at The High Watt last Wednesday night. But don’t think the bands didn’t tear down the proverbial house. For more details on all of the confetti-covered hijinks that went on, read on after the jump…

The crowd amounted to about a dozen people when I walked into The High Watt right at nine. The full lot and scarcity of street parking around The Cannery made it clear that there were big things going on, but standing in a near-empty room, bathed in a soft green glow from the lights of Rubblebucket’s impressively elaborate merch setup, it was clear that big things were not here. Unless one has a distaste for the odd, joyful, and avant-garde; then this was exactly the place to be.

Landlady took the stage shortly after nine. I caught this band in September at The Stone Fox and remembered frontman Adam Schatz being such a prickly little sea urchin of nervous energy that I could not help but feel some secondhand anxiety watching them soundcheck. However, I should have never doubted that the classically trained jazz musician and esteemed noise contributor to a slew of projects (Man Man, Father Figures, Those Darlins, Vampire Weekend and Zongo Junction, to name a few) would deliver anything less than a stellar performance with an uncanny knack for connecting to the room.

Landlady’s music is bundle of frenetic movement, sharp stops and starts and gasps and sighs that sometimes take a long time to “come together” as a song. Schatz keeps the gears greased with his personality, singing with a David Byrne type of wide-eyed innocence overwhelming sense of kindness that fortifies a listener’s patience to see where he’s going. And once that hook is in, the music moves to some fascinating places.

Two highlights of their airtight set were Jesse Zazu of Those Darlins appearing onstage in full genie garb to sing a duet of “You Put a Spell on Me.” The last song of the set was also epic: Landlady ends their shows with “Above My Ground,” an intensely personal track that ends with Schatz instructing the audience to huddle in close and chant the word “always.” It’s a cool bit of interaction that probably made a few new fans, if not from the spectacle of seeing the band go nuts under a strobe light in front of a chanting crowd, then at least from the oxygen deprivation.

Rubblebucket continued the theme of audience participation in a big way. The band has built their reputation on shows that are half performance art, and half ridiculously danceable, off-kilter pop. A backdrop was in place behind the stage for an accompanying light show, so every song had some sort of smile-inducing visual (heart-eyed clouds being a personal favorite.)

Rubblebucket also stands as an exception to the typical answer to the question of “What can ska bands do to survive?” (They can’t.) Their backbone is in the horn section, comprised of Alex Toth on trumpet, Adam Dotson on trombone and frontwoman Annakalmia Traver on occasional baritone sax. The group’s respective musical history is told through their brass contributions; there were streaks of ska, reggae and marching band influences running throughout the set.

In addition to saxophone, Traver played flute and brought some wicked dance moves to the table. Rangy, goofy and prone to whipping her hybrid buzzcut/Mohawk of brown curls around with abandon, Traver proved adept at chasing away any hint of perceived pretention that might have been lingering for any newcomers to the show and getting everyone moving (the room, by now, was comfortably full.)

While I’m not sure what Bleachers were up to downstairs, I doubt they had confetti guns or balloons, or even thought to toss out a makeshift parachute over the crowd so everyone could have giddy flashbacks of sleepovers or gym class while they hopped around. A standout moment of the set was “Carousel Ride,” when a giant pink flower-cake-Lord-knows-what joined the band onstage (see their album cover for a much more accurate visual). I don’t know what it is, I just know that I wanted to give it a hug ever since watching it star in their music video, and was severely disappointed by how scratchy it was when I copped a feel of the costume in its open case in a discreet corner after the show.

The show ended with an encore that dissolved into the band picking up and making their way to back of the venue for an instrumental jam. It was a moment that completely defined the band: visceral, immediate, and unifying. It was also a deft stroke of marketing: everyone was directly deposited in front of that gorgeous merch display.

Both bands are on the last dates of tours supporting their summer releases. Rubblebucket’s Survival Sounds is their third LP and first release on Communion Records. The band hits a new level of weird appeal, and the album bubbles over with free-spirited energy and addictive, well-crafted horn parts. Landlady’s second album, Upright Behavior is out via Portland’s Hometapes; it’s a slippery collection of ear worms that offer something new with each listen. Both albums have a well-deserved place in your collection, and both bands are highly recommended the next time they come to Nashville.