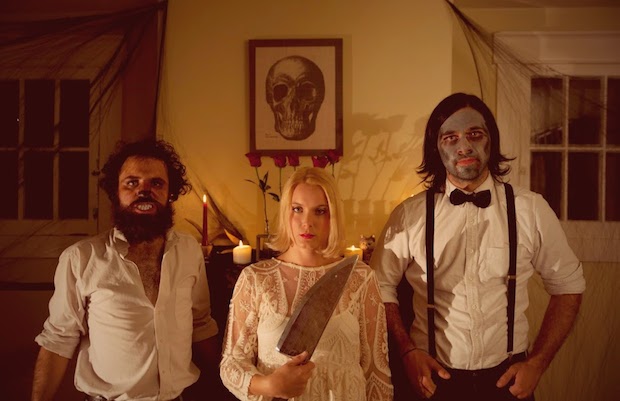 If you don’t have your Halloween evening plans firmed up yet, local indie label Palaver Records is teaming up with Madhouse Management to put on a mini-festival that they’re calling Monster Bash at  (updated: Donelson Bowl, 117 Donelson Pike, Nashville) to showcase fifteen bands from around the southeast on the two companies’ rosters. There will be two stages with music all night and lots of other Halloween fun including a haunted house, a costume contest, and tarot card readings. Artists include Kyle Andrews, The Wans, Blackfoot Gypsies, Kelly Ruth, and Chrome Pony, among many others. Find out all the bands that are playing and learn a little more about them after the jump.

Indie electro-pop artist Kyle Andrews has been a local favorite for some time and is promising to premiere a new music video at the event. His most recent album, Brighter Than the Sun, got national attention and he’s been featured on a mixtape of the best indie artists this city has to offer curated by Daniel Ellsworth and the Great Lakes.

The Wans are playing this Halloween mini-fest right after returning from CMJ in New York. We named them one of the best local acts to catch at CMJ, and when their first album, He Said, She Said, came out earlier this fall we said that the group is “setting the pace in Nashville’s exploding rock scene.” Watch the hilarious video for “Never Win” below.

Earlier this month local indie-pop singer-songwriter Kelly Ruth premiered her video for the classic Halloween song “Monster Mash,” which we shared with you. Ruth has put together a new band featuring a bunch of familiar Nashville faces and since this is one of the few appropriate occasions they’ll have to play this cover, your Halloween night will be completed by an indie version of the campy “Monster Mash.” They’re also going to screen the very funny music video at the show.

That’s not even close to all the bands that are playing what we can only hope will become an annual Monster Bash. The artists above are just a taste of all the music the mini-fest has to offer, including Blackfoot Gypsies, Tesla Rossa, Sol Cat, Richie, Chrome Pony, The Gills, Turf War, Concord America, Tetherball, Phantom Farmer, Deth, Mick Leonardi, and Kylie Rothfield. There’s also going to be beer from Yazoo and food from Drifter’s and Sanders Crawfish.