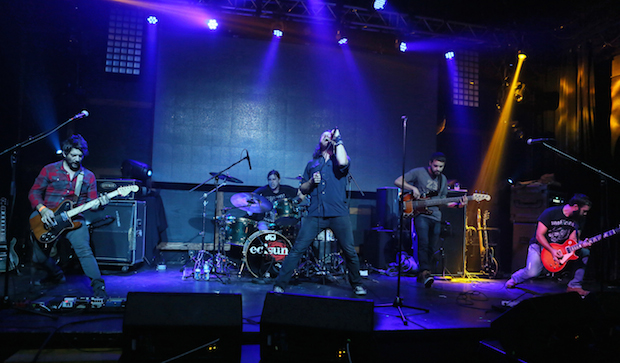 By now you’ve probably realized that we here at No Country do our best to be the first to bring you all things that rock in Music City. If it’s not on the country charts, we are all over it, whether fans are hip to it or not. Another perfect example of us being a little ahead of the curve was last Sunday’s awesome alt-rock bonanza at 12th & Porter, headlined by road warrior rockers Edisun. Judging by the crowd size, I’m guessing you’ve never heard of them, but you need to get up to speed right now, and we can help.

Read on after the jump for more details, and great photos from staff photographer Michael Brooks, including coverage of the two local bands on the bill, Elora Danan and Telegraph. Adding yet another layer of sounds were Orlando, FL natives Anyone’s Guess. All together, for only $8, we’re willing to bet it would have crushed your typical lazy Sunday night of monotony. Next time, be there!

I got to the venue early, and was disappointed to see the connected pizza joint (Music City Pizza) was dead; always a bad sign for an upcoming show. It was so dead in fact, the few people hanging out were watching AMC’s “The Walking Dead”, with TV sound blaring. It was nothing like it is on a Friday or Saturday with a big name band in town, jam packed with fans and pizza date diners. I’m a season behind on the TV show, so I quickly went into the venue space to avoid spoiling any surprises. 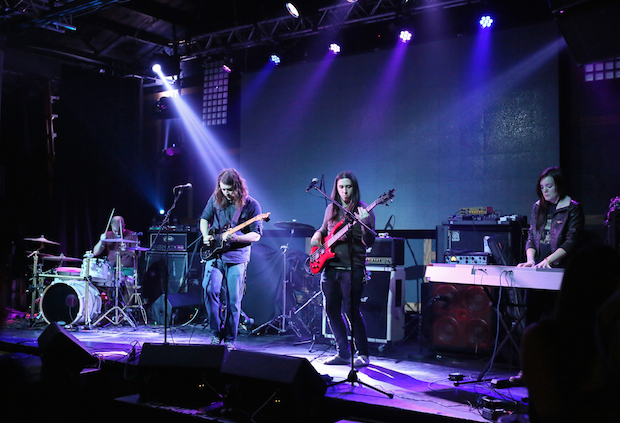 The first of four bands, Elora Danan, was just getting started as I said hi to my photographer and ordered my first brew. The local four-piece was playing pretty tight and dull at first, but definitely loosened up as their set drove on. Who could blame them; it’s hard to get amped for a crowd of maybe twenty people. They had a heavy, more indie alt rock sound than the other bands. I got some Tool vibes and the last song of their set had amazing drumming and riffs. It was so badass, the lead guitarist/singer popped two strings in the process! 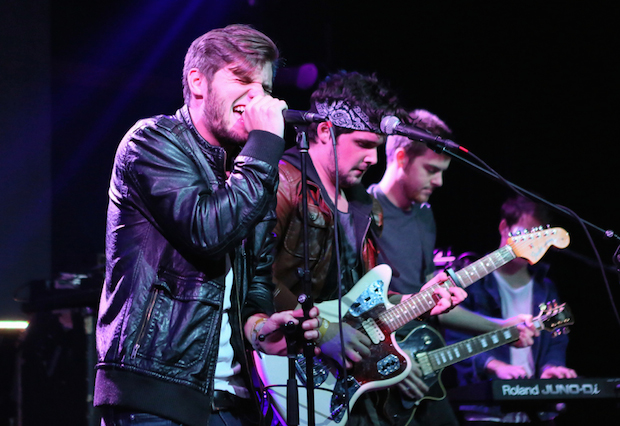 Next up was 80s nostalgia-riffic pop rockers Telegraph. Also local, the six-man ensemble had amazing stage presence from the jump. Lead singer Marshall Cunningham is the perfect frontman, with the hair and the “it” factor all pop acts truly need to blow up. Although quite talented, all the guys looked fairly young, giving them a One Direction vibe. Well, how One Direction would look if they grew up Nashville, and they didn’t have any fancy publicists. They even had their own groupies, a gathering of young female fans who showed up just before they went on, and left just as promptly after they had finished. We will all being seeing more of this band around town, trust me. 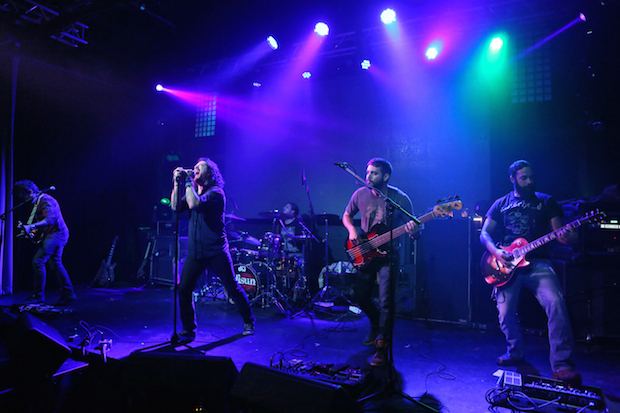 After a smoke break it was time for the main event. I’d talked with Ethan Isaac (vocals) and Joel Kelly (guitar/vocals) of Edisun earlier in the night, and they told me about the genesis of their band. About how some of their first gigs were in Afghanistan and Iraq, touring with the USO. Heavy shit, to be sure, from some heavy alt-rockers you need to get in your life. They’re also completely DIY, touring the country in their very own converted 1977 Greyhound bus, waiting to test the waters of mainstream exposure. Personally, I think it’s only a matter of time until they pack out crowds at much larger stages.

They started their set guns ablaze and pretty much never let up. Hints of Pearl Jam, Soundgarden and Foo Fighters permeate their sound … you know, the good kind of alternative rock. I particularly liked a new track, “Kill Me With Your Kiss”, a slower number called “Vampires and Wolves”, and they also threw in a Beatles cover, just for good measure. The only thing that sucked about their show (and the entire night in general), was the lack of ANY real crowd. The two dozen, at best, attendees were all really into the tunes, but I know Music City can do much better, even on a Sunday. 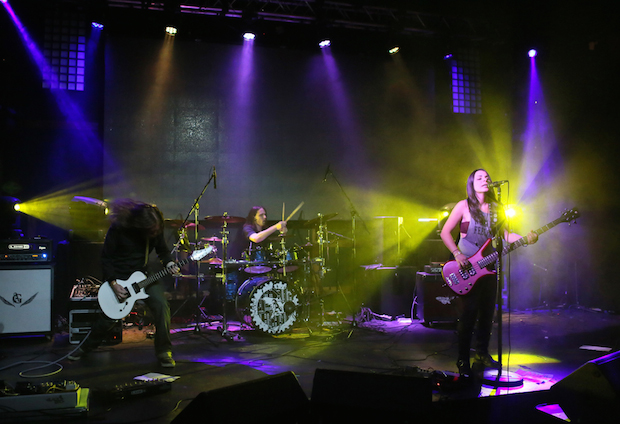 Last, but certainly not least was more rock from Anyone’s Guess. They had been added fairly last minute, thanks to help from Edisun, and the Florida trio couldn’t have been happier to not “waste a day”, and get a gig. Again, with little or no crowd to play for, they powered through an inspired set. Sanja Jovanovic (lead vocal/bass) reminded me of a darker, REAL punk rock version of Avril Lavigne. She had more edge than the alt-pop princess could every hope to fake.

By the end of it all, I was floored at how much great music I’d just experienced, and shocked at how few people had shared it with me. Although we call ourselves Music City, sometimes I wonder if all genres get the love they deserve. There’s still good alternative rock out there, and I found it. Get hip to all these great bands stat, and be sure to check out the photo gallery below.