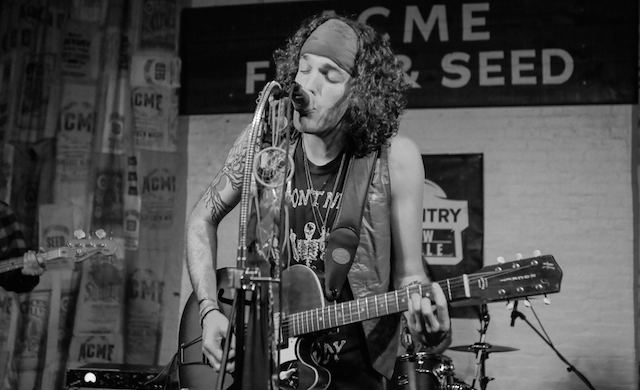 The Cunning. Photo by Michael Brooks.

Every Tuesday for the last couple of months, we’ve had the honor of working together with the fine folks at Acme Feed and Seed to put on a show featuring some of our favorite local and touring acts. So far, we’ve had great success with this endeavor, as our most recent show on October 21st should indicate. This performance featured two stellar acts: Austin based rock troubadours Emily Wolfe and local heavy hitters The Cunning. All in all, it was one of our most successful weeks yet. For more details on the show and to view the fantastic pictures taken by Mr. Michael Brooks, click on through the jump!

We’ve said it before, and we’ll say it again: each and every time we come to the Acme, it seems more packed. Now, whether that speaks to the generosity of you readers, the strength of the establishment, or some combination of the two, is frankly irrelevant. What matters is that fifteen minutes before Austin based indie rock outfit Emily Wolfe began their set, the lower level of the Acme was filled with eager listeners, dining, drinking, and ready to take in the sounds of a quality musical act. Luckily, the SXSW veterans were able to deliver on all fronts. As a five piece featuring two guitars, female lead and harmony vocals, keys, bass, and drums, Emily Wolfe and company have a lot of sonic possibilities to work with. Throughout the course of their set, they utilized these instruments in a vast number of ways, creating a performance varied in dynamics, key signatures, and tempos. This served to keep the audience engaged, and we overheard several people excitedly mention that Emily Wolfe was the best band currently playing on Broadway. Overall, it would be safe to classify their performance as a success, and we definitely recommend coming out to catch these guys should they ever return to Nashville.

Although it was Emily Wolfe’s first performance in Nashville, the second act and headliner for the evening, The Cunning, has played Nashville numerous times, being a local act and all. This time spent sharpening their skills in front of a live audience has definitely paid off, as the group displays an easy and playful demeanor on stage that few bands match. Coupled with their well-written tunes, it’s hardly surprising that The Cunning seems to have built a bit of momentum recently. The group almost feels like a classic rock act, both in terms of their attitude, appearance, and fast-paced songs. This tends to translate into a rather fun performance, especially when one pays close attention to the lyrics. Fans of The Cunning will probably be interested to know that the group actually played a few cuts from their recent sessions with Vance Powell, which should be released shortly. They were good tunes, and we encourage you to download them when they’re released.

All in all, we’d say it was a pretty fun evening, and we’re looking forward to next week’s showcase, which will feature Modoc and Featherface. We’ve also got a gallery of the photos taken of the previous showcase below, check them out!