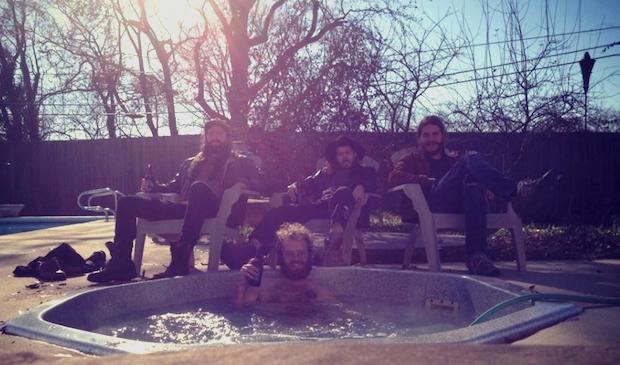 It’s been a minute since we’ve heard from local rockers Fly Golden Eagle around town, but that’s just because they’ve been busy touring around the country supporting some of the hottest acts on the road, signing with ATO Records, oh… and they just dropped an epic 26 track, 2 hour LP, Quartz (released physically in a shorter format titled Quartz Bijou).  The album is supposedly inspired by and lines up with the groundbreaking 1973 film The Holy Mountain, an avant-garde masterpiece directed by Alejandro Jodorowsky, produced by The Beatles’ manager Allen Klein, and funded by John Lennon and George Harrison.

We finally had a chance to sit down with this incredible new effort yesterday, and the only question we had to ask afterwards is “Why would you drop so much awesomeness at one time?”  Wouldn’t most artists milk a few songs over a number of releases in order to ensure longevity?  I guess when your debut LP, titled Swagger, was strong enough to get you to Bonnaroo twice and signed to ATO Records, you feel like you can’t go wrong, and with the new release Quartz, they did nothing wrong.

It’s a jambalaya of sounds that perked our ears to the groove filled jams of Fly Golden Eagle in the first place, but with more room for playful exploration in their world of rock.  At times, it is psych pop at other time hard driving rock and roll and sometimes it just gets straight up spacey.  Of course, you need to judge this for yourself, so have a listen to “Stepping Stone” below, and then head over to Spotify to start streaming what quickly just shot up the ladder of our favorite new local releases of 2014.  Also, make sure you mark your calendar for the weekend of November 14th.  FGE will be performing in-store at Grimeys in the afternoon on Friday 11/14, followed by a listening party (and screening of Jodorowsky’s Holy Mountain) at The Stone Fox that evening.  Saturday 11/15, head over to Queens Art Collective for a proper hometown throwdown with Clear Plastic Masks.