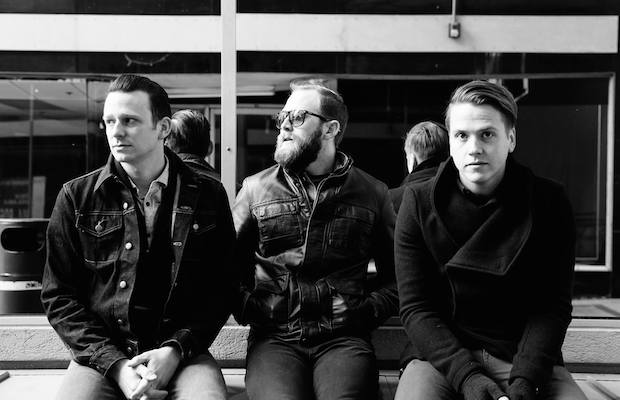 By now we hope you’ve heard, our live events production wing, No Country Presents, has taken up residence at Lower Broadway’s hippest new restaurant, lounge, retail, and event space, Acme Feed & Seed, where we’ve been bringing you a weekly, FREE, Tuesday night showcase, featuring some of our favorite emerging local talent. The curated showcase runs from 8 to 11 p.m. each week, and, so far, has featured everything from folk to funk to rock to indie. For our next installment, on Tuesday, Oct. 28, we’re bringing you an exciting double bill of local alt rock act Modoc and Texas psych rock outfit Featherface. Keep reading to find out all about them, and cancel any other plans you might have Tuesday night, because you’re coming to hang with us. Got it?

After relocating from Indiana in 2011, Modoc dove headfirst into the Nashville rock scene and never looked back. We’ve been buzzing about this group since the release of their 2012 full-length debut, Fortune & Fame, and, in the years since, festival appearances, television placements, a followup LP, and what seems like endless amounts of praise has helped propel them to the top of Music City’s rock bubble. Modoc are not just a band you need to know, but a band you should know if you call yourself a Nashville rock fan. Channeling influences like Pearl Jam, Wilco, and The Strokes, the group are as eclectic as they are exhilarating, and their live show, which we’ve witnessed on numerous occasions, is never short of stellar.

Hailing from Houston, Texas, and continuing our trend of sneaking some quality touring acts into the mix, Featherface are a dreamy, psychedelic, indie pop group who have amassed quite a bit of buzz over the past few years and whose latest single, “Make U Mine,” is, hands down, one of the best under the radar tracks of 2014. The group have, so far, released a full-length and an EP, but seem to be gearing up to drop their most concentrated and fully realized record yet. Show up to Acme early, grab yourself a Mule Kicker, and see what all of the fuss is about for yourself- for the low, low price of free!

Modoc and Featherface will perform Tuesday, Oct. 28, at Acme Feed & Seed. The show is 21+, music begins at 8 p.m., and, per usual, it’s totally FREE. Downtown PARKING can sometimes be an issue. However, if you’re willing to walk a few blocks, street parking is typically easy to find on the numbered avenues south of Broadway, or along Korean Veterans Blvd. Metered spaces are often free after 6 p.m.