[Hump Day Diversion] How Smart Is Your Music? 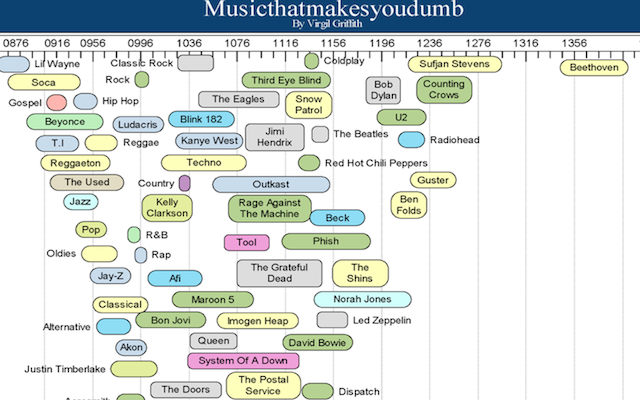 What up, humpers? Have you diverted yourself yet with this opportunity to claim an intellectual leg-up on those with less sophisticated music taste? This entertaining little infographic has been making the the virtual rounds and if you’ve yet to give it a gander, now’s your chance!

Software author (and implied music snob), Virgil Griffith, explains that the chart’s “data” is culled from how many “Likes” a certain band has on Facebook from a specific college population and then comparing that number to the school’s average SAT scores. He freely admits that correlation does not in fact equal causation in the presentation of his findings, but it certainly does give pause for consideration — what came first: the T.I. or the F?

Despite the obvious lack of scientific rigor given to this investigation, it’s rather irresistible, no? Now there’s somewhere to point for “proof” of your own superiority, evidenced by all that time you invested in decoding obscure references buried in Radiohead lyrics in undergrad while everyone else was busy listening to vapid pop hits.

So take the jump with us and see where your tastes fall in the intellectual hierarchy and catch some videos from across the spectrum!

First off, the full chart from Musicthatmakesyoudumb… (credit where credit is due right here)

And here’s music for the mentally superior… a little Sufjan Stevens from his Fallon appearance in ’12… proving you gotta’ be brilliant in order to “get” what the heck he’s up to… catch those outfits!

Falling on the smarter side of the spectrum, is our man Beck… here’s a throwback to Milktooth covering “Do We? We Do” from his Song Reader collection at our birthday party! (Remember how awesome that was here!)

Just under average we have a LOT of the most popular and radio friendly acts… and there are all kinds of social and political implications here we’re not gonna go anywhere near… instead, we’ll just drop this Bon Jovi video right here…

And finally, it looks like our lowest academic performers are also our fiercest fans of The Wheez himself, Lil Wayne… so… there’s that (and a hilarious list of his many, varied monikers here).

Now take to social media and show everyone how smart you are because you listed Beethoven un-ironically amongst your favorite music tastes and have a happy hump day!