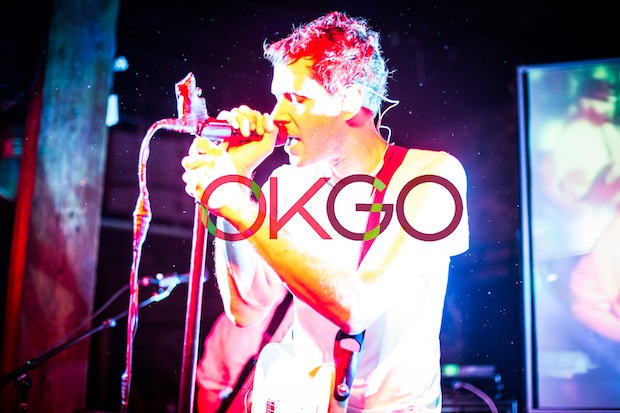 We’ll be finding confetti hidden in our clothes and unmentionables for a week after the OK Go show at Mercy Lounge last Friday. The band blasted us with rainbows of paper basically every other song, and the crowd was wading through it like it was the biggest snowfall Nashville had ever seen. Their hilarious antics throughout the set and the overly ambitious cannoneer made for one hella good time. We didn’t expect any less of a live show from a band whose music videos are as calculated as a broadway production, and we even saw some opera during their set (yep, opera).

OK Go continues to impress and there seems to be no shortage of rabbits under their hats. With their new album out last Tuesday, we can bet that there will be more legendary videos to come in the very near future. Check out our full review of the show plus some cool photos after the jump.

In our preview for Friday’s show, we made a guess that OK Go would be playing a set heavy with new songs from their album Hungry Ghosts that just dropped last Tuesday. WRONG! Much to our surprise (and a bit of relief), they played all the old favorites that the audience could sing along to and only four tunes from their new album. Hungry Ghosts seems a mite more synth driven and has some seriously killer tracks like the 80’s ode “The Writings on The Wall” and “Turn Up The Radio”, but we and probably everyone in the Mercy Lounge were psyched to get all nostalgic with classics like “Get Over It” and “Here It Goes Again”.

The Lounge was packed like sardines with a surprisingly young crowd; minus the middle aged dad parked on a stool right in front of the stage. High fives to anyone who noticed Mr. Party Foul. Whatever space that was left between people was progressively filled in with (according to frontman Damian Kulash) 75 lbs of tiny scraps of biodegradable  recycled confetti. 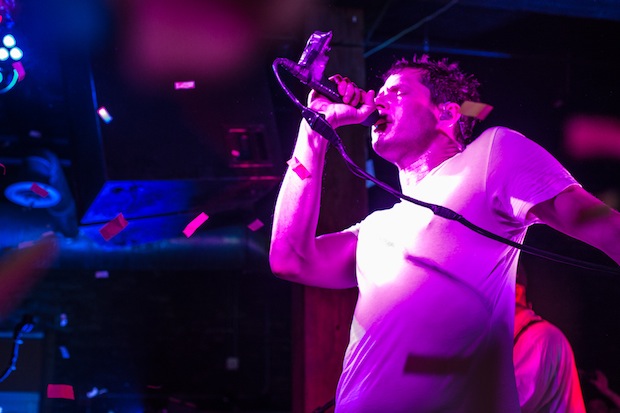 On Damian’s mic stand was a tiny video camera firmly taped and projecting his face distorted and multiplied on two screens behind drummer Dan Konopka. Consistant with the band’s videos, it was a very colorful lightshow. That is, at least, before they went out. We suspect that the raging confetti cannon blasted them too. But not to worry! Damian says, “Our set is a finely greased machine and we’re prepared for moments like this!” So, while the lights technician tinkered around, Damian and bassist Tim Nordwind performed “The Confrontation” scene from Les Miserables complete with blocking and regional-specific accents. Two things were obvious: They’ve done this before, and they get a good kick out of it.

For their song “There’s a Fire” from the band’s self titled album back in 2002, Damian recorded the crowd’s stomps, claps, and “tsss” sounds to use in the performance. Even though his vocal baseline that he recorded and looped on the spot was painfully out of tune, he laughed it off with us and made the song a fun moment in spite of it. We love a band with personality.

OK Go ended their encore with “Here It Goes Again” where they invited the crowd to climb onto the stage and, of course, hit us with CO2 and tiny paper again. You know it was a good party when you walk back to your car with a trail of confetti like a leaking scarecrow.

During the set, Damian hinted that there may be a new video coming out for the new album’s “I Won’t Let You Down” in the next few weeks. If you’ve seen any of OK Go’s videos, then you know already that they’ve set the bar high, and we can’t wait to see what else they’ve got up their sleeves. These guys are pioneers in their art, and they just might make history… again.