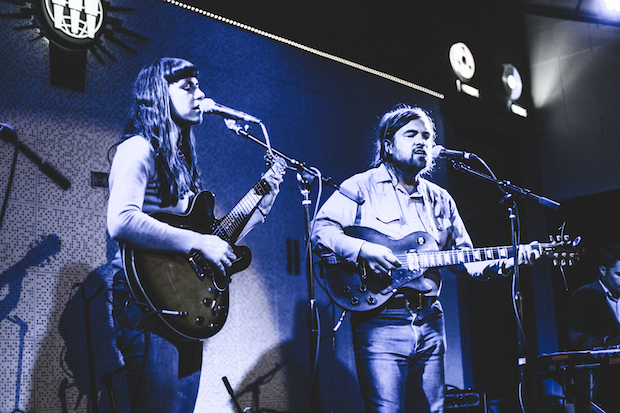 The Dutchess and the Duke. Photo by Jakes Giles Netter.

The rainy weather last Friday probably made the Seattle-based The Dutchess and the Duke feel right at home while playing The Blue Room at Third Man Records and cutting a live LP before a small but enthusiastic crowd in one of the group’s first shows since going on hiatus back in 2010. The band describe themselves as “campfire punk,” and their set had the intimacy of playing around a campfire, with easy-to-sing-along-to harmonies and various percussion instruments handed out to the audience. The group’s core members, main songwriter Jesse Lortz and Kimberly Morrison, have a long history of playing in a variety of west coast punk bands, but the switch to alternative folk has suited them well.

Read our full review and see some gorgeous photos of The Dutchess and the Duke playing Third Man’s Blue Room by Jake Giles Netter after the jump.

As shows at Third Man are, this event was in large part about Third Man’s vinyl-is-God ethos as about the band, and the chance to see almost any group play in the Blue Room is a treat just to see the inner bowels of Jack White’s magic factory. The Blue Room has incredible sound and a wonderfully chill atmosphere; the big oriental rug and taxidermy on the walls make it feel like you’re watching a band play in a friend’s living room, you know if you were friends with Jack White and his living room had excellent acoustics. There’s a live video feed of the show being recorded directly to vinyl and lights above the stage to indicate when the vinyl is cutting.

The Dutchess and the Duke write and record sometimes as a duo of just Lortz and Morrison, but on Friday they had a band with them that included a drummer (who to keep things minimal and played only a tom and a tambourine), a keyboard player, a bassist, and the occasional bit of pedal steel. The band was very self-conscious that they were recording, discussing what they should play next between songs and taking a break while the LP flipped sides. The show started on time at 8 p.m. and ended shortly after 9 p.m., only lasting long enough for the group to cut their record. It felt almost more like watching a recording session than attending a Friday night rock gig.

The band’s tendency to juxtapose pretty harmonies with two or more voices and dark, twisted lyrics calls to mind Kurt Cobain-favorites the Vaselines, especially on the crowd favorite “Mary.” “Hands” and “Reservoir Park” were great creepy country-folk numbers made perfect with the addition of the organ. The closer “Armageddon Song” was another one the audience loved as Lortz advised everyone to “smoke marijuana, be happy, and smile” while the drummer handed out tambourines and shakers to the crowd, which sang along with the call-and-response harmony part. There were a lot of long-time fans in the audience who likely picked up the live LP (only available to ticket holders, sorry guys) and are hoping they won’t have to wait so long for more activity from The Dutchess and the Duke.