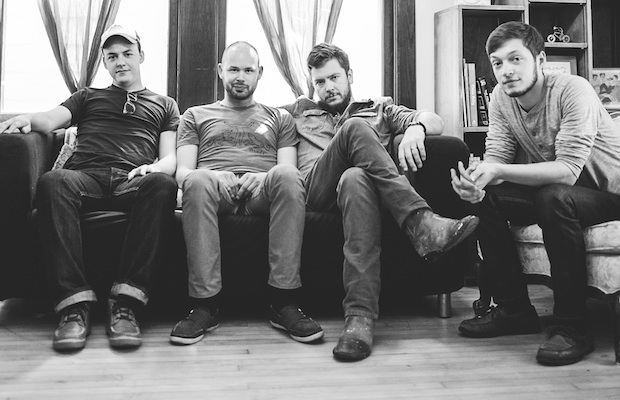 If you’re looking for something to do tonight and getting fancy with Iggy Azaela at Vanderbilt just doesn’t sound you’re your thing, then we’ve got the perfect solution for you. October’s edition of Communion Clubnights brings a rich mixture of folk music to Nashville tonight with Field Report, Water Liars, Foreign Fields, Great Peacock, and Cereus Bright at Mercy Lounge. Read on for more about the lineup!

An anagram of lead singer Chris Porterfield’s last name, Field Report were born from the wreckage of folk-rock group DeYarmond Edison after Justin Vernon left to become Bon Iver and the remaining members formed Megafaun. Their latest release, Marigolden, jumps around with its sound; there’s a hint of electro-pop on “Wings,” some acoustic storytelling on “Pale Rider,” and is rounded out with the piano-driven ballad “Ambrosia,” which you can listen to below:

Mississippi-based trio Water Liars consist of songwriter/guitarist Justin Kinkel-Schuster, drummer/multi-instrumentalist Andrew Bryant, and bass player GR Robinson. The band came together in 2012 to release their debut album, Phantom Limb, and have toured heavily ever since. They’re currently touring in support of their recent self-titled release, a dynamic mix of folk and rock and roll. Check out their single “I Want Blood” here:

Originally from Wisconsin, Foreign Fields are currently based here in Nashville, and are working on their follow-up album to 2012’s Anywhere But Where I Am. Members Eric Hillman and Brian Holl combine forces to create ambient folk music with haunting, ethereal elements reminiscent of Sigur Ros accompanied by acoustic melodies, which makes them a perfect fit as the opener on The Lone Bellow’s fall tour. Check out their video for “Little Lover,” the first single from their forthcoming album:

Nashville-based duo Great Peacock are another local addition to the bill tonight. Andrew Nelson and Blount Floyd create infectious, harmony-driven songs that are heavily influenced by their Southern upbringings, but are catchy enough to almost cross into pop music territory. They are currently working on an upcoming album, Making Ghosts (release date TBD), but caught attention with their self-titled EP. The video for their song “Tennessee,” a tribute to the effect the state had on their musicianship, was filmed right outside of Nashville.

Cereus Bright are another band that gives Knoxville, TN a reputation for producing talented musicians. In addition to opening for fellow East Tennesseans The Dirty Guvnah’s later this fall, Cereus Bright have made a name for themselves opening for Sturgill Simpson, Jackie Greene, The Lone Bellow, and Phillip Phillips, showcasing their ability to range from acoustic folk to gritty, southern rock. Their cover of the Bee Gee’s “Stayin’ Alive” received major attention from publications across the country earlier this year, but their original content holds its own. They recently recorded and released their popular song “Winds of Change,” which they’ve been performing on tour for years, to help jumpstart this next round of shows.

Field Report, Water Liars, Foreign Fields, Great Peacock, and Cereus Bright will perform tonight, Oct. 9, at Mercy Lounge. The show is 18+, begins at 7:30pm (doors at 7pm), and tickets are available for $15.