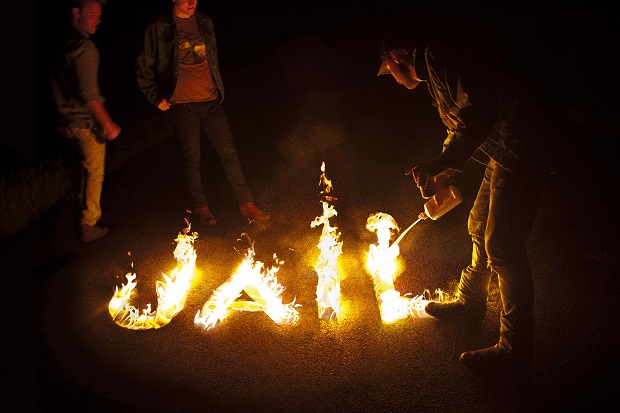 Songwriters flock to Brooklyn and Nashville to bring their visions to life, and the road between these two creative hotspots is well tread.  Tonight, you get a chance to catch one of the fresh faces in the indie rock songwriter scene with Brooklyn’s Heaven’s Jail along with Nashville standouts The Cunning and Them Vibes at The Stone Fox.  The show is brought to you by our friends at Lockeland Springsteen, and, for only $7, this is the perfect way to start your weekend.

Heaven’s Jail frontman Francesco Ferorelli is another in a line of thoughtful songwriters that have captivated our ears of late.  In the vein of artists like Father John Misty and Matthew Houck of Phosphorescent, the latter who produced the debut album from Heaven’s Gate, the lyricism shines atop the indie rock.  The debut album, titled Ace Called Zero, released on August 26th, and the band will be spending the weekend in Nashville.  So, if you can’t catch them tonight, make plans to check out their in-store at Grimeys on Saturday.

Riding high on the release of their debut self-titled EP, The Cunning are bringing a bit more power to the Nashville indie rock scene.  The result is an energetic live show that has caused their inclusion onto a number of bills around town of late.  Expect that trend to continue, including an upcoming gig at one of our Tuesday night Acme showcases.  Have a listen to the new EP below to get an idea of where they are taking this.

Riding the high of their radio friendly track “Lorelei”, Them Vibes truly excel in their live show.  The energetic, in-your-face rock music has brought these guys into the consciousness of more and more music fans in and beyond Music City.  In a perfect pairing for this bill, be sure to get out early to catch the kick off of an incredible night at The Stone Fox.