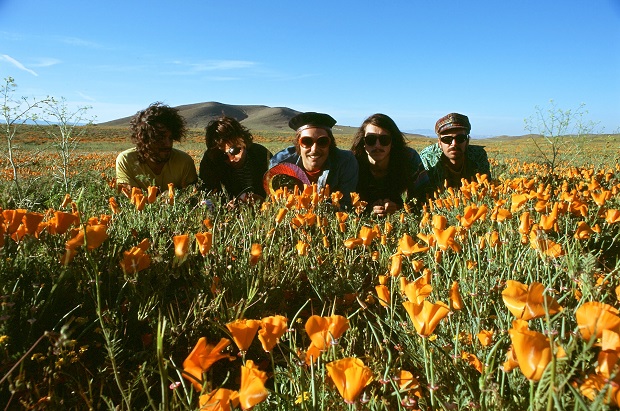 In Nashville’s self-proclaimed and justified home of rock and roll, Exit/In, tonight, you’ll get a taste of rock that is dripping with fuzz in every possible variation.  Southern California’s The Growlers make their first return to Nashville since headlining last years Burger Records Caravan Of Stars showcase over at Mercy Lounge.  This time they are out on another headlining tour with eccentric So Cal neo-punks, The Garden, in tow.  Local rockers and blog favorites Ranch Ghost and Plastic Visions fill out a bill that will be worthy of earplugs and a designated driver.

Head below for more info and some tracks from the bands, and grab your $15 tickets right here.  This one gets started earlier than usual with Plastic Visions set to start things off at 8pm.

Fuzzy beach drenced psych pop is the name of the game with The Growlers.  After a scraped recording session in Nashville with Auerbach of The Black Keys, the band returned to southern California to record their upcoming release, Chinese Fountain, which has already received impressive reviews.  However, after listening to the title track below, you may notice a more disco and danceable sound than their previous records.  Have a listen, and see if you can convince your fellow Nashvillians to move their asses tonight.

Fellow Burger Record alums, The Garden are new to us, but after running through their catalogue for the past few days, we’re looking forward to getting to know yet another group of punk inspired rockers out of the Southern California scene.  Founded by twin brothers, Wyatt and Fletcher Shears in 2011, they have created quite the following since with their neo-punk stylings while harnessing electronic and hip-hop influences to boot.  New bands are always a plus for us, and, based on what we hear below, this is a not to miss set.

Is it a bad thing to say that local rockers, Ranch Ghost, may be the most traditional rock band on the bill tonight?  Nope.  The former Road To Bonnaroo winners are continuing to pick up steam outside of our beloved city with their incessant touring, but have still managed to drop a couple of new 7-inches of late.  Check out this recent session video to refresh your eyes and ears on just how great Ranch Ghost is.

For a band like Plastic Visions, an 8pm set must feel like a brunch outing.  The raucous and LOUD noise rockers are all about the energy of front man Kane Stewart who teamed up with Cage The Elephant’s Brad Shultz for production of his stellar self-titled 2013 debut EP release.  A year of SXSW raves, Lollapalooza invitations, and an opening slot for Cage The Elephant at their Mercy Lounge set earlier this year, 2014 has been kind to Plastic Visions.  You should get there early to experience what should be the biggest party of the week.  Good luck at work tomorrow.

The Growlers, The Garden, Ranch Ghost, and Plastic Visions will perform tonight (September 23rd) at Exit/In. The show is 18+, begins at 8pm, and tickets are available for $15.

Watch The Black Keys Perform "Gotta Get Away," Cover Edwyn Collins' "A Girl Like You" on 'Fallon'