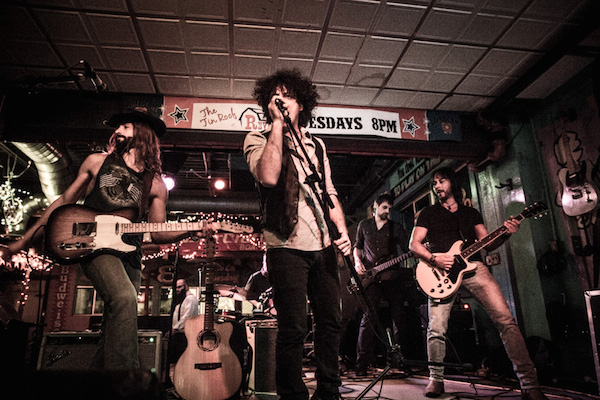 Tonight at The End, shit is going down. Presented by Premier Booking Enterprises, Them Vibes, Bird Dog, Samm and the Get Down, Burnside Style and Mount and Lion are all going to be taking the stage starting at 8PM. For the price of $1 per band (no, seriously – the show is only $5), you are getting a pretty sweet bargain for an epic night of rock music. And these aren’t groups that just stand up there and hope you’ll like them. These bands play their hearts out on stage whether or not you’re listening, and ultimately they know you’ll listen because how can you ignore charisma and heart-pounding excitement like that, let alone the addictive music? Keep reading to find out a little more about each band that will be taking over The End tonight.

The greatest thing about Them Vibes is that they don’t apologize for who they are. They don’t play neatly plucked out one-hit-wonder rock tunes. They’re messy, they’re vibrant, they’re chaos in the best way chaos can exist. We’ve already raved about them in the past and our opinions of this energetic group have done anything but change. Their debut release, Shine On, is available for sale on their website, and tonight they’re likely going to woo you into purchasing that digital album. Watch the video below to get a taste of what Them Vibes are capable of delivering:

This quartet is all sorts of mystery. When you check out the ‘About’ section of their Facebook page, it’s filled to the brim with cryptic poetry that, when read closely, gives you a sense of the deep love for music that all the band members feel. These guys don’t just love music – they need it to breathe, exist and function. That kind of admitted dedication is always admired by us folks here at No Country, as we’re sure it’s admired by you, too. Having recently released their album Daywalkers in February of this year, the Nashville-based Bird Dog will be shipping off shortly to Texas to promote the new music, so you’d better see them before they head out of Music City…

SAMM AND THE GET DOWN

Described simply as “rawk,” Samm and the Get Down is an even bigger mystery than Bird Dog. Hardly any information exists on the band, except for the hometown of Greensboro, North Carolina. We can only assume that with this little information put out on the internet, Samm and the Get Down impresses people enough with their music to make all other details revolving around the musicians obsolete. Below is a track from their latest album, Drones, released in 2013.

Formed by Nathan Aronowitz and Emma Holden, Burnside Style is a recently-created blues/rock band that is setting out to make their mark on the Nashville music scene. They’re so new, in fact, that their music hasn’t even been put online yet. Do you know how rare it is that anyone in this city gets to say that they actually heard new music? This is your opportunity (before Burnside Style starts getting gigs all over the place) to brag to your friends about a “super awesome band I just heard that, yeah, is definitely going to be big.”

We love when bands have names that are a play on words, so before you even hear Mount and Lion‘s music you know they’re cool. This quartet has even put up a song for a free download. Mount and Lion blurs the lines between folk, rock, blues and jazz to bring to you a new take on these genres. Their latest release, “Familiar Taste,” is available below for a listen before you go see them perform it live.

Them Vibes, Bird Dog, Samm and the Get Down, Burnside Style, and Mount and Lion will perform on September 18th at The End. The show is 18+, begins at 8PM (doors at 7PM), and tickets are available for $5.