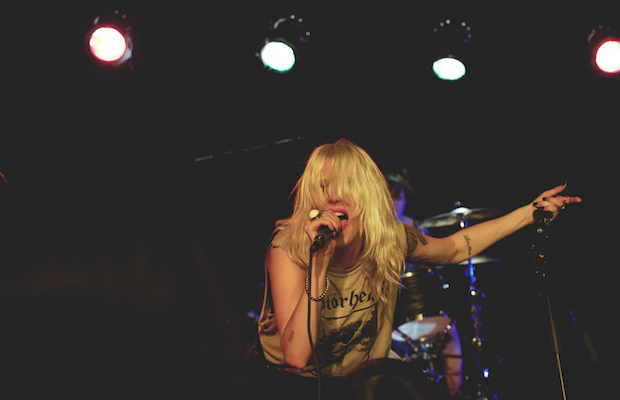 My one and only prior experience with White Lung was at Bonnaroo, in the summer of 2013. Out of place and under-appreciated, the Canadian punk outfit played on the tiniest of stages, Cafe Where, at a less than ideal set time and for a modest crowd. Despite this, they performed with a ferocity and energy that transcended those circumstances, and left me intensely hoping for a chance to catch them in a more proper setting, with a more in-tune crowd. Finally, this week at The End, I had that chance.

Arriving late from another event, I heard the tail end of what must have been Idle Bloom (a last minute local addition and perfect choice for the bill), and worried that I might have missed White Lung’s set. Fortunately, and typical for The End, things were running quite a bit behind schedule, and Canadian art punks and White Lung tourmates, Mormon Crosses, began to set up. Now on my third event of the night and feeling rundown, I realized I only had the energy in me for one proper performance, so, after a bit of Mormon Crosses’ impossibly loud, dynamic, and impressive set, I chose to spend awhile at a nearby bar waiting for White Lung to perform.

Upon my return, the room, which had been alarmingly sparse in attendance at the start, had filled a bit, yet still not the level such a talented underground act (bordering on mainstream recognition, at this point) deserve. No matter; the ladies and gent of White Lung spent little time getting situated before launching into what seemed to be an abbreviated set, albeit a fantastic one. While I could find no evidence of any previous White Lung performances in Nashville,  their DIY years weren’t as well-documented, so it’s hard to say definitively. Regardless, they seemed somewhat unsure about the town, with frontwoman Mish Way pondering, at one point, “Nashville, this place is weird. Doesn’t that she-bitch demon Taylor Swift live here?”

Blasting through selections like “Drown with the Monster” and “I Rot,” White Lung channeled a greater sonic clarity than many of their peers, and the obvious passion and conviction of their performance elicited a strong, enthusiastic response from the small but devoted crowd. It was hard to tell if Mish Way particularly enjoyed being there, but, at the very least, she seemed like she needed to be, expelling angst, energy, and philosophy through not just her voice, but her entire being, throughout. While my ideal White Lung experience would still involve a deservedly larger audience, The End was one hell of a step up in performance environment; a perfectly grungy and intimate punk venue for one of punk’s premiere and refreshingly sincere underground acts.