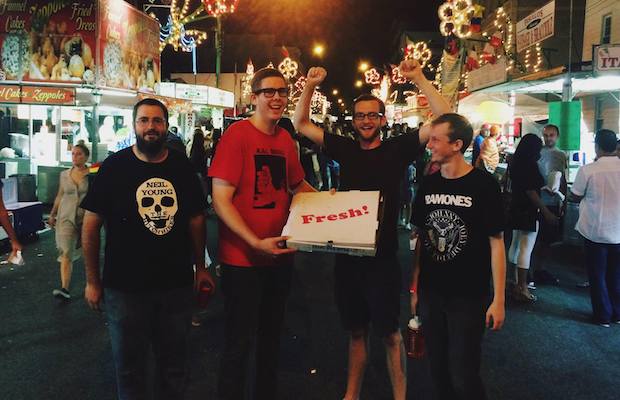 Music collectors and lovers of all things indie rock take note: The latest artists to be featured in the on going Infinity Cat Cassette Series, (curated by Casey Weissbuch of Diarrhea Planet), is Left & Right and the title of the album is Five Year Plan. As part of the limited release festivities, only 300 copies of the cassette will be made, and once they are gone hobby hounds, they are gone for good. Of course if you just have to have the songs, you can get them on the band’s bandcamp page. The Philly, by way of Virginia, lo-fi garage punk band are also in the middle of a tour that winds it’s way through Music City very soon.

This Saturday, they will be playing their official Infinity Cat Tape Release show at The Stone Fox with local bands Bully and JP5 filling out the bill. Tickets are available for $8 at the door and music should start around 9 pm with JP5, followed by Left & Right and Bully to close it out. After the jump, we sit down with Left & Right drummer Zak Krone and talk about music, the band’s van, the new album and even hot chicken. Buy the album, go see them this Saturday and click on for the interview!

No Country: We love the new record especially the Pavement and Superchunk vibes we are getting. Are they big influences to your band’s sound?

Zak: Superchunk is one of Daniel Merchant’s (guitar/vocals) favorite bands and Pavement is one of Phil Dameron (guitar/vocals) favorites, so those comparisons make sense. We have a lot of other influences, a lot of guitar rock we listen to, it all makes it’s way into our songs whether we’re conscious of it or not. I think one of my favorite things anyone has written about us came from the bio Infinity Cat wrote, something like “being depressed never sounded so fun”. I really liked that.

NC: Speaking of Infinity Cat, how did you guys get hooked up with them?

Z: We met Casey (of Diarrhea Planet) back when we were still based in Virginia, last July. Casey really liked our band the first time we played with them and he kept in touch. We played a few other shows with DP and one day he just called us up and asked if we wanted to put out our new record we had finished as part of the Infinity Cat Cassette Series. We were like ‘hell yeah let’s go for it!’ So basically it was just a lot of luck and good timing.

NC: That’s so cool to hear. There really isn’t any big secret is there? You just have to keep playing shows.

Z: Yeah, Casey and DP have really gone to bat for us super hard, which is kind of amazing, because I had been listening to their music for about two years before I knew any of them personally. It’s just kind of weird that this band you’ve been a big fan of, the very first time they see us play, and they love it and latch on. And not just to be nice, but to be genuinely into it. It’s all been a bit surreal.

NC: There’s several tracks in particular we really like: “Age of Independence”, “Low Expectations”, “After the Openers”, “Kickstand”. We also love a track called “Work For Free”, which isn’t on the album but also currently available for DL?

Z: Yes. That’s a song we recorded while we were recording the new album, so we only did like two takes and we were like, this is just something we’ll keep in our back pocket. We ended up putting it out on bandcamp early to try and raise some money for van repairs before we left for our current tour.

NC: We’ll be sure to plug that one too, hope you got things worked out in time.

Z: Thanks man! The van is fixed.

NC: We like to call your sound blue collar garage rock and we really like the record’s message, to tough it out, work hard and you’ll figure things out along the way. Seems very poignant for our generation (millennials).

Z: It’s definitely an album for people who are trying to figure it out. I think that is very true in our case. You can fall into the trap of romanticizing being poor or (being) working class, and having a chip on your shoulder. We’ve definitely paid dues to start getting some of the attention we’ve been getting now, but there are other bands who’ve gone through more than us. There’s always going to be people who’ve had it easier and people who’ve had it harder. One of the things we really try to do is be very genuine with our music.

NC: We think that definitely shows on this record, it feels real and very unpretentious. We also noticed that the title track and the first song on the record are very different (hard/heavy/fast) from the others. Is there any reasoning behind that?

Z: I would totally agree that song is an outlier. I can’t completely speak for the rest of the band on this one, but that song, to me, sounds like a mission statement to the rest of the album. Our band is a democracy through and through, but “five year plan” was one of just a few lyrics I suggested that made it to the album and it ended up being the album title. Basically it’s saying we were all in that weird place everyone is after graduating college. We were wondering what to do with this band, and none of us had that five year career plan, none of us wanted to go to grad school, and we couldn’t stomach the idea of a traditional 40 hour work week. So we were like ‘just fucking go for it’, and we moved to Philly where we could play more shows and be around more people etc.

NC: So you guys have played Nashville twice now, a third performance soon, what are your thoughts on Music City?

Z: Nashville is dope! That Fork’s Drum Shop is the best drum shop I’ve ever been to. The hot Chicken at Princes’, I can’t handle it, but it was so funny watching Andrew Abbott (bass) eat it. He got the hot, and was red in the face and crying the whole time, but smiling too. We were doing an interview at the time and he could barely speak! I was starting to wonder if he was a masochist or something because he was so into it and so happy, but you could tell he was also in so much pain (laughs). Don’t even get me started on all the great bands we’ve played with there, or bands from Nashville we like. They are all sick!

Left & Right will play The Stone Fox this Saturday (Sept. 13th) for their Infinty Cat Tape Release with locals JP5 opening and Bully headlining. The music starts around 9 pm and tickets are available for $8.