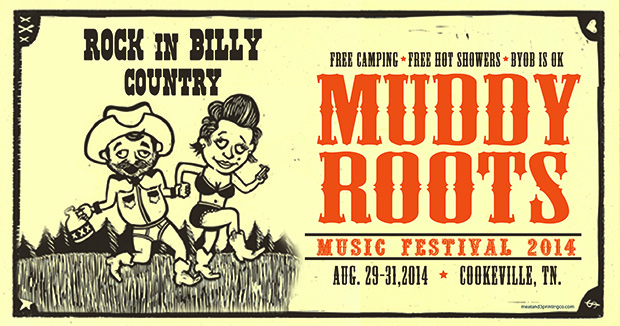 The festival kicks off in Cookeville this Thursday night with two fantastic acts, Woody Pines and Jake Orvis & The Broken Band and then goes full throttle with all three stages Friday afternoon through the early morning hours of Monday. We are posting our top picks from each day of the festival, so check here for Friday’s favorites and after the jump below for some Saturday’s most anticipated bands. Tickets for Muddy Roots Music Festival are still available here!

Anyone who can grab Jeff Beck’s and Robert Plant’s attention the way these guys did surely deserves to be taken seriously. Whether on tour with Reverend Horton Heat, Robert Plant, Rancid, The Black Keys, or Hank III, the Legendary Shack Shakers’ blend of rock, punk, blues, and country has electrified crowds all over the globe.

If you missed them last year at Third Man Records’ Blue Room, here is your chance to see Mudhoney in person. These garage rockers have been blowing minds since the late 80s, first blazing the trail for what would become known as grunge and then rocking faces ever since.

You will never forget your first Goddamn Gallows show. We guarantee it. Our first introduction to the band was at Springwater Supper Club where the accordion/washboard player, TV’s Avery, pulled a bad tooth out of a fan’s mouth on stage mid-show. Then at last year’s Muddy Roots Music Festival, they suspended a man in air by way of large hooks through his skin. The music is pretty bad ass, too, so the show is definitely worth checking out!

The Blasters have been rockin’ since 1979 and have always been loved by the critics even if they never caught on with the mainstream. They describe themselves simply as “American Music,” but others have labeled them roots rock, blues rock, cowpunk, or rockabilly.