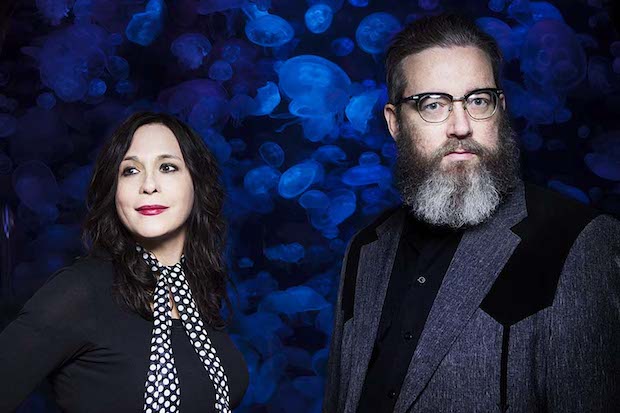 If you’re one of those people that stays caught up on all of the hottest new TV shows, chances are you’ve already heard of The Handsome Family and just didn’t realize it. Their song “Far From Any Road” was chosen by T Bone Burnett to be the theme song for HBO’s crime drama True Detective, and has garnered 3.2 million listens (and counting) since the show aired earlier this year. But if you’re not familiar with the band outside of their connection to this show, you need to get acquainted ASAP and check out their show at The Basement this Saturday night at 7pm with special guest Richard Buckner.

The Handsome Family, a husband-and-wife duo perfecting the art of Gothic Americana music, has actually been around for over 20 years and released more than 10 albums. Rennie Sparks (banjo, bass, vocals) specializes in writing lyrics while her husband Brett (guitar, keyboard, vocals) composes the music, creating songs that range from traditional country and bluegrass to murder ballads. Brett’s deep baritone voice pairs well against Rennie’s dark, haunting lyrics about everything from observing nature to real-life scenarios about love and loss. Their talent certainly hasn’t gone unnoticed; they recently opened for Wilco frontman Jeff Tweedy on his solo tour (including his Ryman show back in June), and Andrew Bird recently released an entire album solely of their covers. If that isn’t a selling point, then I don’t know what is.

Richard Buckner is an alternative-country artist who originated in Lubbock, TX and then moved to San Francisco, which explains the connection between the musical styles he incorporates. His most recent album Bloomed, which was released earlier this year, is heavily rooted in folk with plenty of acoustic tunes, so be sure to get there early for a full night of melodramatic music.

The Handsome Family and Richard Buckner will perform Saturday August 23rd at The Basement. The show is 21+, begins at 7pm, and tickets are available for $10 at the door.