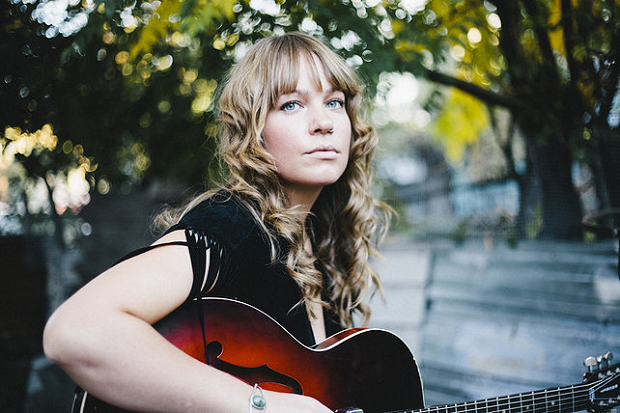 After an ill advised decision to squeeze in an after work happy hour last Friday, we arrived at a relatively packed house at 3rd & Lindsley but were still able to grab a seat at the bar. The motorcycles in the parking were a clue that, Ray Wylie Hubbard, the man who wrote the Jerry Jeff Walker hit “(Up Against the Wall) Redneck Mother” was in the house. Opening the show would be Brandy Zdan, who emerged for the first time as a solo artist in 2013 but is anything but a rookie.

We have our full review after the jump.

Brandy Zdan co-founded Twilight Hotel with Dave Quanbury in 2003 and together they recorded two JUNO nominated albums. In 2011, Zdan was recruited as a triple-threat side woman by Austin-based female super-group The Trishas for her six string, lap steel, and accordion skills garnering her a 2014 Lone Star Music award nomination for Musician of the Year.  Tonight she took the stage alone and played songs from her 2013 EP Lone Hunter as well as the “Nowhere to go by Anywhere” written with Liz Foster.  She has a great, haunting voice and backed herself nicely on either electric or acoustic guitar. She is doing several shows with Ray Wylie Hubbard and it seems to be a good fit as the crowd was very supportive.

As we said earlier, it was definitely a Ray Wylie Hubbard crowd.  He’s been called an “elder statesman” of the Texas music scene and describes himself as “funky and strip bar dirty” on a song on 2012’s Grifter’s Hymnal. He wouldn’t be considered mainstream by any stretch but has developed a strong, loyal following. His band features his son, Lucas, on guitar. Some of the standout songs were “Snake Farm” and “Drunken Poet’s Dream”.  He shared his philosphy that “You get more attention burning down the barn than taking out the trash”.  There may have been a song or two off his upcoming album due but by this time we were engaged with the people on either side of us and the always friendly bar staff so we may have missed an introduction or two…