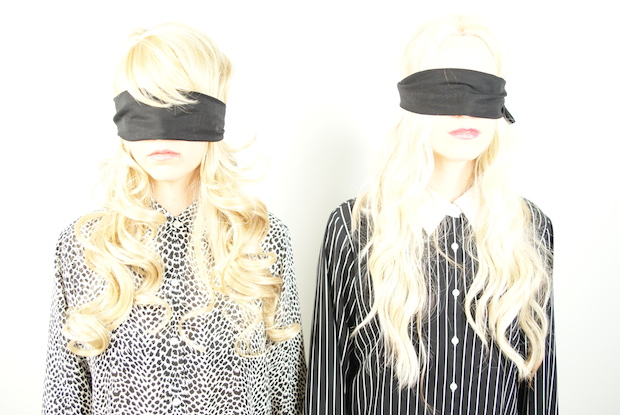 The ghostly electro pop band The Casket Girls are set to weird out everyone at The End tonight with music sprung from the minds of a pair of Southern sisters whose heads may not be screwed on completely straight.

Phaedra and Elsa Greene were discovered playing autoharp and singing under a tree in their hometown of Savannah, Georgia by Graveface Records owner Ryan Graveface, who is now the key third wheel on their trippy creative tricycle. Label-mates Dreamend, a band known for its ultra textured guitars and having long been the biggest creative outlet for Ryan Graveface, will open along with Cincinnati-based beach rockers Coconut Milk.

Things get started tonight around 9pm, the show is 18+, and tickets are available for $8.  While you count the hours, Elsa Greene took the time to answer some questions via email, click through to read our interview with her and find out more about the Casket Girls’ bizarre creative process and what’s in store for the next album.

No Country: Have you and Elsa been playing music together your whole lives? What were some of your musical influences growing up?

Elsa: We have always written in varied formats, both separately and together. We were actually working on a novel together, blurring the lines of perceived reality when we met Ryan Graveface. We have always made up songs together as well, but never with any professional intention. It was more of a game to us, like an exercise to stretch our imagination and ability to unfilter thoughts. We didn’t listen to much music outside of classical as young children… At some point we became enchanted with the oldies station, and got stuck on the 60s girl groups… Also we were obsessed with Alicia Keys… And Outkast

NC: Can you tell me a little about your hometown?

E: We grew up just outside Savannah, surrounded by Spanish Moss and marshes, and we have never left, so that says something…

NC: How did the involvement of Ryan Graveface change the music and the process that had been going on between you two before you met him? What made you want to be on Graveface Records?

E: It changed entirely as we had really never done something like this before. The process is unique in that Fay and I initially work totally separately from Ryan… He sends us the musical beds, and together we lay down and recall our dreams… Graveface was the obvious choice as it’s amazing to have the label owner in your band!!

NC: Obviously Graveface Records is part of it, but is there anything else about Savannah or the American South in particular that influences the Casket Girls’ music?

E: Yes!! Our surroundings are so much a part of who we are and what we do… We are obsessed with Tybee Island. You can really feel the past, present and future in Savannah, which directly inspires our passion for the mystical and erasing the lines that measured time presumes…

NC: Can you describe the Casket Girls’ songwriting process?

E: Ryan sends us files filled with magical musical landscapes… We then set up our gear and record our very first listens to everything and we keep recording over the track until the song presents itself to us. We reference our dream journals and poetry books that we write in every day. It feels pretty unique and weirdly connected… We have been writing a lot lately… We just finished a song that we had no idea what we were talking about at first… Then the very next day’s events completely informed the song we had just written. Super weird.

NC: I’ve read that you hate performing and created your look with the blonde wigs and the sunglasses for something to hide behind on stage. What is it about performing that you guys dislike? After getting some touring under your belt is there anything you’ve learned to enjoy about it?

E: We love it now!! We initially were just terrified because we had never done anything like this and were scaredy-cats. So we invented these looks to free us of our own shackles, and it worked.

E: We are currently working on a double record centered around the concept of singularity and the dangers of disconnection. There are no rappers…. So far

The Casket Girls, Dreamend, and Coconut Milk will perform Thursday, August 14 at The End. The show is 18+, begins at at 9 p.m., and tickets are available for $8.

Returning to Nashville for their first headlining show since 2012 (notably, they passed through last fall to open for...

Kevin Griffin at Pilgrimage 2016. Photo by Mary-Beth Blankenship. It was only a few years ago that Better Than Ezra...

[INTERVIEW] Hayley Williams Looks Back on ‘After Laughter’ and the Emotional Road to Paramore’s Local Celebration, Art + Friends

By Philip Obenschain (@pobenschain). Chad Gilbert is a busy guy. “When I’m off tour I don’t want to be...