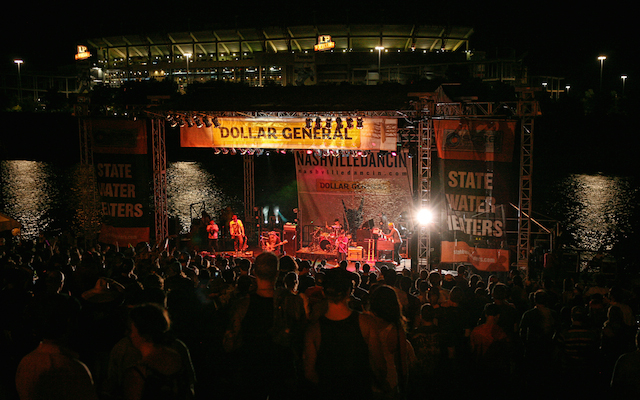 Readers, we’ve gone to a ton of shows this summer, so you can take it from us that this has been a fantastic summer for live music. Fortunately, the summer isn’t over yet, but last week we got the opportunity to witness one of the best sets of the season: Lettuce, Space Capone, and Sol Cat at Nashville Dancin’. It was the second-to-last installment in this free concert series (Hard Working Americans will finish out the series this Thursday), and we came with only one goal in mind. That goal, friends, was to become one with the funk, and by all accounts we were massively successful. After the jump, we’ve got the full account of the evening, as well as some fantastic photographs by the one and only Michael Brooks, so go ahead and get the details on one of the better shows we’ve been to in the last few months.

The afternoon was still in full swing when local indie rock favorites Sol Cat took the stage at Riverfront Park off Broadway. In the past, we’ve always seen Sol Cat at house parties and small-to-mid sized venues, so the fact that they were playing both downtown and on a fairly large stage was already enough to make this show stand out in our minds. Perhaps we’re assuming a bit too much, but it seemed to distinguish the show from the band’s perspective as well. Typically, Sol Cat’s indie blues-rock comes across as quite musical yet also a bit sloppy. The rough edges of their music aren’t a jab at the band itself by any means, but rather a trait of the genre as a whole. The semi-organized chaos is a huge part of what separates the indie rock scene from the commercial rock scene, and in the context of a house party or a smaller show, it’s really cool to hear. Sol Cat seems to have built their career off this fact, which is perhaps why the group seemed to take a bit longer than normal to find their footing on the Riverfront Stage, a much more commercially appealing and family friendly environment than the local rockers are typically used to.

However, this challenge also made room for Sol Cat to prove why they’ve managed to make a name for themselves in the crowded indie rock scene here. Rather than clamming up and playing an uninspired set, the group tacitly moved towards a slightly cleaner, more appealing sound. Sure, it wasn’t the wildest Sol Cat show we’ve ever seen, but we were certainly impressed by simply watching the band so aptly adapt to the crowd. Furthermore, the tactic worked! As their set went on, one could feel the energy level of the crowd beginning to rise, and by the end of their set, the energy throughout the venue felt extremely high. For this reason, we’d like to give a hats off to Sol Cat. Cheers, guys.

Unlike all of the other weeks of Nashville Dancin’, this week only featured three bands, which means that despite the fact it was only 7 pm, the crowd had swelled quite a bit by the end of Sol Cat’s set. This kept the event spirited throughout the transition to the next act, Space Capone. Although Space Capone is also from Nashville, the funk act is sonically quite different. That being said, the seven piece seemed to have no trouble picking up where Sol Cat left off. Of all the weeks at Nashville Dancin’, this was definitely the one that contained the most dancin’, and we have to believe it’s because of the precedent set by Space Capone. Simply put, the group killed it. Their grooves were tight, their melodies memorable, and lo, the spirit of funk descended upon them.

There’s a lot of comparisons out there that pit Space Capone against Michael Jackson, and to be honest we were trying to avoid calling attention to any resemblances between the group in an attempt to avoid cliches. Obviously, we’ve failed at that, and it’s because there really aren’t too many other acts that make such good benchmarks. Besides the vocal abilities and charisma between band members and audience, the similarities between the two groups are also evident in the broadness of their musical appeal. Everybody, and we mean everybody, was digging Space Capone’s set; you could just feel it in the air. It must be exhilarating to play in a band that excels in creating such an environment, and indeed this isn’t the first time we’ve seen Space Capone manage to seemingly effortlessly get a crowd bumping. These guys know what they’re doing, and it’s always a treat to get to watch them do it.

Based solely on the last paragraph, you could probably guess that by the time headliners Lettuce came out on stage, the audience was already in full-on party mode. That assumption would be correct, and if we may, we’d like to make the claim that this was the wildest, most energetic Nashville Dancin’ of this year (of course, Hard Working Americans may top that on Thursday). Lettuce is one of few bands with a reputation for only playing the wildest, most energetic shows available to them, and it was quite evident that the group was having a fantastic time up on stage. The group played most all of their hits, and also had the distinct honor of having Ms. Alecia Chakour sing with them. She’s touring with Lettuce, by the way, so if you didn’t get a chance to see this awesome combination at Nashville Dancin’, there’s still time to catch them.

Perhaps the best part about Lettuce set was the fact that it was actually nighttime. This seems to happen every week at Nashville Dancin’; the headliner is the only band who plays after sun down. While it is true that the party starts during the day, it definitely doesn’t peak until nighttime, which serves to further distinguish the headliner from the opening acts. Seeing as this week was already in full swing by, oh, 7:15 pm, having the benefit of the cover of night was certainly a benefit to Lettuce, and getting to see the stage lights in their full glory seemed to attract even more people to the stage, further increasing the hype of the show. It was a fantastic, dance heavy evening for us, and if this upcoming Thursday is anywhere near as good, you’re all in for a fantastic set. Keep an eye out for our coverage of the final Nashville Dancin’, which happens this Thursday and features Hard Working Americans. Until then, may the funk be with you!