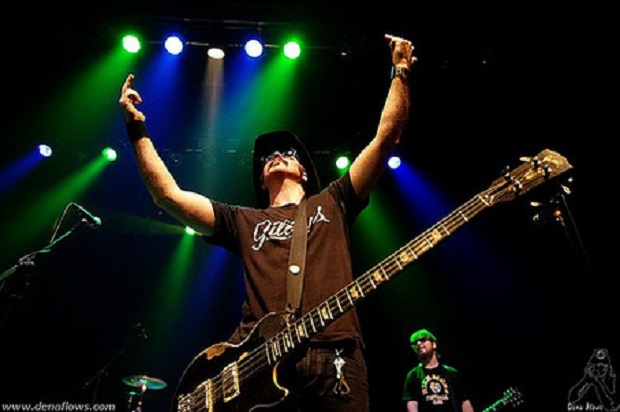 Every now and then we all need a night of just pure rebellion. If you’re in a disobedient mood, then Exit/In is providing you with a soundtrack for your antics tonight. The lineup includes Supersuckers, who we first introduced you to back in May, and Nashville’s own “power slop” band, Stallion. The show is 18+, which is perfect for anyone about to start college and looking for a performance dripping with attitude. Supersuckers have been known to take photos of the crowd flipping the bird and post those on their Facebook page; so get your middle finger ready, let your inner rocker emerge, and get down to Exit/In for a night of pure, unadulterated rock n’ roll.

They call themselves the greatest rock and roll band in the world, but this isn’t just the four members of Supersuckers being cocky; everyone from Eddie Vedder to Elijah Wood to Bam Margera has commented on the quality of the rock group and all of them have been praising Supersuckers. Based out of Seattle, Washington, the rock/country/punk band has been around for years just working their asses off – and it’s paying off big time. The group just released their 19th (yes, you read that right, 19th) album, Get the Hell and it’s up for sale at their website and are gaining more national and international notice with every tour they do. Check out the single from their latest album and join the rebellion of beer drinking, middle finger lifting and generally exciting chaos:

Trio Stallion is joining Supersuckers on the lineup tonight, and for good reason. They’ve been referred to as playing the “perfect soundtrack to bad decisions,” which just makes us even more proud to know they’re Nashville natives. The band’s newest EP, The Yacht Club Sessions, is out now for free at their bandcamp; but we’ll provide you with one of the songs right here to listen to:

Supersuckers and Stallion will perform on July 23 at Exit/In. The show is 18+, begins at 8PM, and tickets are available for $12.

Self releases new video for "Runaway," new album out July 29