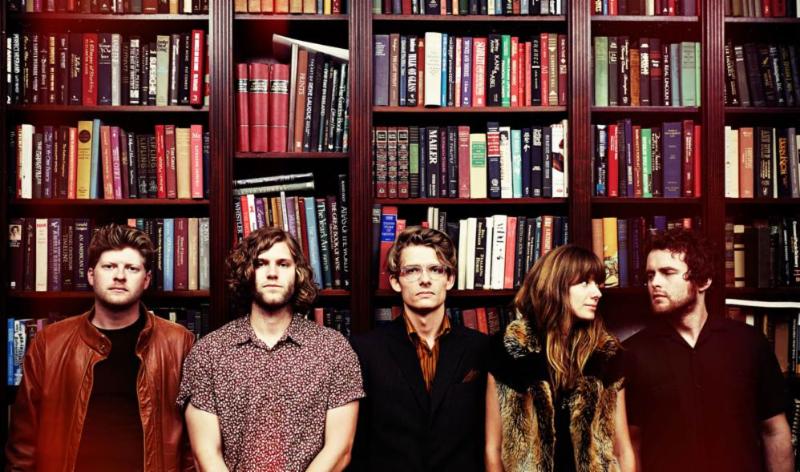 After the smoke cleared and our ears stopped ringing, we found ourselves asking, “did we just experience a battle of sonic clad warriors with the clash and clang of hard hitting fuzz riffs, or did we just see Avers perform for the first time?” Monday night was an experience of whirling atmospheric surf rock, rolling over guitar jam style sessions completely inventive at every level. If you had a chance to come out to The High Watt to see Avers with special guests The Jahnnies (featuring members of FUTUREBIRDS), then you know the experience that had us rolling back on our heels. We also had the great opportunity to speak with JL Hodges from Avers to ask how they managed to master the sharp, electrifying, and psychedelic experience that is their debut album Empty Light. So, if you aren’t locked in already, then keep reading below for the full interview and a few more notes about the show.

The Jahnnies were the perfect beginning to this night, breathing out loud orchestrated mazes of layered instrumentation. As mentioned before, they featured some members of FUTUREBIRDS out of Athens, GA. With a wall of electrified intensity and the rearing heads of punching bass and drums, Jahnnies grabbed our attention and held it there with a deep intent. Throughout their set you could see that this smooth flowing evolution of melodies was where these guys lived. With a dive and push ever so slightly every song seemed to dance in its own way. This was an incredible performance, and for more information on these guys check out FUTUREBIRDS. Here is their recent music video for the single “Serial Bowls” off of their recent album Baba Yaga.

Avers came, they saw, and they twisted our musical sense of direction through a vertigo of heart pounding, teeth grinding goodness. The ease with which each of these artists performed on stage was astounding, as if they were caught in their own sonically developing net. Capturing our attention and holding it with an intensity reserved only for the seasoned pros that these guys were. Their new album Empty Light is a move back to a simple layering of demanding indie psychedelic rock. We wanted to learn a little bit more about what instigated this movement and talked with JL Hodges about the album and what they have prepared for us next.

We love the new album Empty Light, tell us what happened to spark this collaboration that allowed you to record an album of such inventive quality in only 10 days.

JL: Basically, all of us have been in the Richmond music scene for a long time. We didn’t know each other very well and occasionally we would see each other around at shows and at that type of thing. Then James Mason’s brother (The Mason Brothers) took a hiatus from playing unexpectedly. They had booked a ton of shows, so I stepped in for a while. Shortly after, Adrian and Alex, who in were Hypercolor together, joined James and I, and the four of us got together. We didn’t really know each other at all and we were just gonna mess around in the studio with no real plan. It surprised us how it just came together so naturally and so easily. I think it was just a really good kind of creative outlet with us. We did four songs then Tyler Williams, now our drummer, came and checked out the stuff and was really into it and lastly we added Charlie to play keyboard and guitar and realized we are now a 6 piece band.

After that we just got in the studio to see what happened. We wrote these songs and recorded them with Adrian. Luckily we had the great opportunity of recording in Adrian’s studio here in town. This allowed us to have a couple of spots in town to record and it was exciting. So we would start the song in the evening and by 3 or 4 in the morning we were just lucky, we eventually ended up with songs that we were all excited about. Then, Tyler kind of convinced us we should make this official. We ended up putting the record Empty Light out in April digitally and now are getting ready to put out the vinyl here pretty soon.

I heard you guys recently went down to Kill Devil Hills, NC with a car load of equipment and wrote/recorded 10 more songs, can you tell us a little bit about that experience?

JL: Yeah, we started working on the second record, I think we have 15 songs total recorded now. We kind of did a recording retreat. I spent longer on this recording getaway than my own honeymoon. Luckily, I have an awesome wife that knows she’s married to life with a musician. We’ve started to play a few of these new songs in the live set just to see how they are going. This whole thing is an experiment, so like everything we are doing, nothing is calculated, we are all learning and just going for it.

What’s next on the drawing board for you guys?

JL: We are going to be doing this tour all summer then we are looking at some fall stuff as well. As far as a second record, we don’t really have a time table. A big part of it for us is to just remain creative and constantly be working on new material. We have all been in bands where you just make a record and then stop writing. So, in the face of that, we are just trying to ride this wave and keep it going.

Grab their new album Empty Light and also keep an eye out as they will be releasing it in on vinyl in the next couple of weeks. Here is a little treat from Avers, a glimpse into their amazing live performance from a small venue in Richmond, VA featuring the song “Harvest. Enjoy.