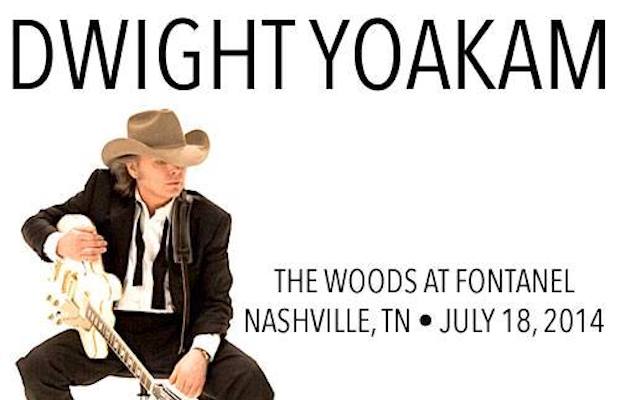 While we are always fans of the Woods At Fontanel, you have a particularly special evening tonight.  The weather is perfect, and, if you haven’t yet taken the short drive out to Nashville’s premiere amphitheater yet, tonight is the perfect night to sit under the stars with the uber talented line up of Dwight Yoakam, Justin Townes Earle, and Kristin Diable & The City.  Read on below, to find out more about these artists, and go ahead and ask that girl out tonight.  It may be your best chance.  The show starts early, so plan on a happy hour tailgate, and go ahead and grab your tickets here.

Yoakam may have started in Nashville, but the local machine couldn’t handle his swagger and rock influences.  Pretty sure they are kicking themselves now.  Let’s face it, the machine is about money, and Yoakam, at this point in his 30 year career, has penned no less than 21 bonafide hits and sold somewhere in the neighborhood of 25 million records.  After Nashville shunned Yoakam, he relocated to Los Angeles where one of the first country-crossovers began to truly make strides, with his rockabilly influenced take on what makes our Music City famous.  There’s no wonder that he’s tapped to play Forecastle Festival later in the weekend.  Have a listen to “Honky Tonk Man” to see how Yoakam took the influence and found a way to make himself an international name, and to find out why you should have little doubt about your Friday night plans.

Justin Townes Earle fits the persona of the East Nashville hard working musician like no other.  A friend of many in the city (and part time resident), the sometimes troubled soul sat down with us to discuss his vagabond lifestyle prior to his pro-bono appearance at the benefit for his pals Luella & The Sun.  It wasn’t until we saw one fan after soundcheck unabashedly run up to hug the contemporary legend that we truly realized the popularity of Earle’s songwriting.  You’re likely to hear to some new tracks from his upcoming release, Single Mothers, which drops on September 9th, but, you’re also sure to hear some standards that JTE perfects, just like the cool cut of  “When John Henry Died” below.

Often times, singer-songwriters focus too hard on trying to emulate something they respect, and don’t focus on their original sound. When we first heard Kristin Diable, she was playing a free show at The Basement, and we were immediately blown away by the powerful front woman. Since then, she’s gone on to considerable recognition in her native home of Louisiana with substantial press and sets at the prestigious New Orleans Jazz and Heritage Festival. Fans of Bonnie Raitt and Grace Potter should definitely fake a late afternoon dentist appointment to see potentially the next great female vocalist when she opens up the show.