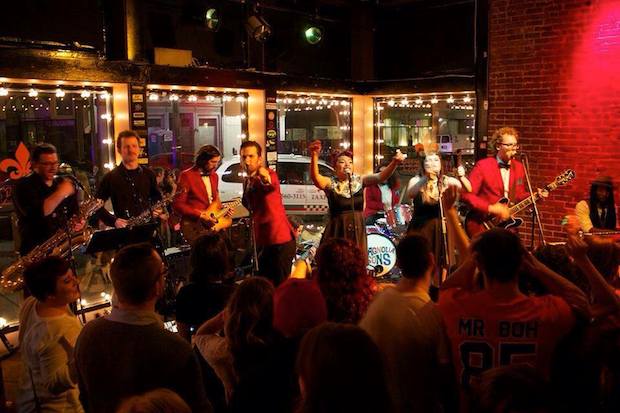 Not heading to Forecastle, but still looking to go big this weekend? Look no further friends, because we know just the band to help you go extra hard! Magnolia Sons are a locally formed rock ’n’ soul band who’s massive line-up is just as massive as their sound. Look for anywhere from 10-12 musicians on stage at all times grooving, harmonizing and jamming the fuck out!

Helping fill out this all local line-up are road tested rockers The Nobility and garage slacker rock quartette Baseball Bat. Together they make The High Watt THE place to be tonight. It’s an 18+ show and it’s only $5 but get there early so you don’t miss anything. Doors open at 8 pm and the music starts at 9, but until then be sure to read on after the jump to get the low down on three of your new favorite bands.

A throw back to a by-gone era, Magnolia Sons are one of a kind. It’s not everyday you see such an amazing ensemble of talent, and just plain cool ass people, together on one stage at one time. They make us yearn for the day when big band ruled the radio and the charts. We’ve been on the bandwagon ever since they played our caroling party back in December, and we are happy to report they have been recording new music ever since! Their latest feel good romp is “Run Baby Run” which you can have a listen to below. A music video is in the works, as is another single, and some new acoustic tracks and an EP are in the not too distant future. Be sure to stay tuned to No Country for the latest and go see them do their thang, thang live TONIGHT!

The Nashville based, self-deprecating troubadours have been at this for awhile, and we think they are poised to blow big … if they want to that is. The Nobility have done it the hard way, DIY tours across America, and in true indie fashion, self-releasing two full-lengths and three EPS (one of which is Christmas themed). Their latest  The Secret of Blennerhassett Island is worth more than just a casual listen and needs to get some rotation in your weekly music ration stat. Don’t believe us? Have a taste below.

On their FB page, Baseball Bat said all they ever set out to do was jam out some Weezer songs in their basement, but some how the music they played morphed into all originals and a soon to come EP. They’re still pretty new on the scene, so there isn’t much out for these guys media wise, but we’re pretty stoked to take in their self described “slacker rock” first hand. Don’t worry; we’ll report back with a review to let you know what they’re all about.

Magnolia Sons, The Nobility, and Baseball Bat will perform TONIGHT at The High Watt. The show is 18+, begins at at 9 pm (doors at 8), and tickets are available for $5.

And The Giraffe, Bear In The Campsite, & Moes Anthill | Tonight | fooBar