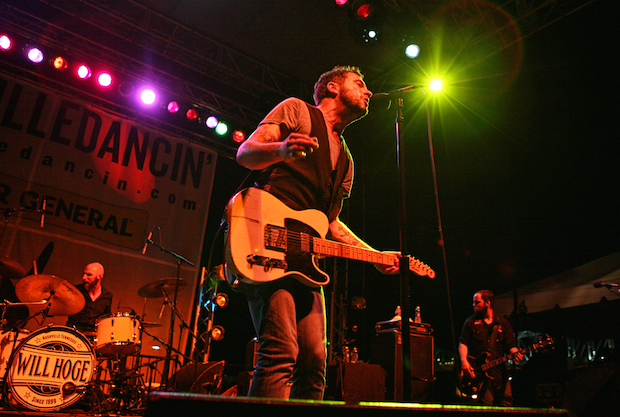 Will Hoge. Photo by Michael Brooks

Week 3 of Nashville Dancin’ was about as country fried as it can get, but we still couldn’t resist stopping in on one of the best FREE, weekly events being held in Music City all summer! Shows at Riverfront Park have a mini-festival feel, and we’re down to check them out no matter who’s playing. Stay tuned to No Country for more info on this week’s bands.

This past Thursday had one of the biggest line-ups so far, all be it heavy on the country flavor. Local boy who’s starting to make it big Will Hoge headlined, with Drake White & The Big Fire, Brian Collins, Clare Dunn and Donica Knight filling out an awesome bill. Read on for more info on the top-two acts, and be sure to be there (rain or shine) for this weeks festivities.

After celebrating (?) America’s loss to Germany earlier in the day, we decided to rest a bit before heading downtown for Week 3 of one of our favorite summer concert series, Nashville Dancin’. Rain was in the forecast, so we shacked up at Riverfront Tavern for a little as the worst of it blew through. We caught the end of Clare Dunn, laid out our blanket and got comfortable for Drake White & The Big Fire. 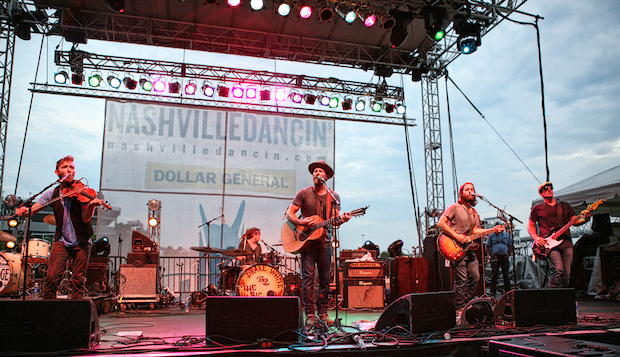 A self described ‘God fearing river rat’, White had charisma to spare.

“This song is for people who are tired of fake shit,” he explained to the crowd before one of our favorites of his set.

Technically, you’d call their music country, but we enjoyed the heavy elements of blues and rock ’n’ roll that were peppered into everything they did. They performed part of “House of the Rising sun”, and beautifully blended it into one of their originals. They jammed out everything they did at length, and really started to get people moving.  Their full rendition, and sing-along friendly version of “What’s Up” by 4 Non Blondes nearly brought the house down. White got everyone to belt out a response during the “I said hey, hey, hey” parts and it was magical.

During the break in acts, they had a Karaoke contest and an extremely talented 9-year-old won herself an electric guitar. Her composure and talent were many years ahead of her age, and everyone was impressed with her take on “Bobby McGee”. When she finished applause rained down, and the other competitors knew it was hopeless. After taking her bows, it was time for the main event. 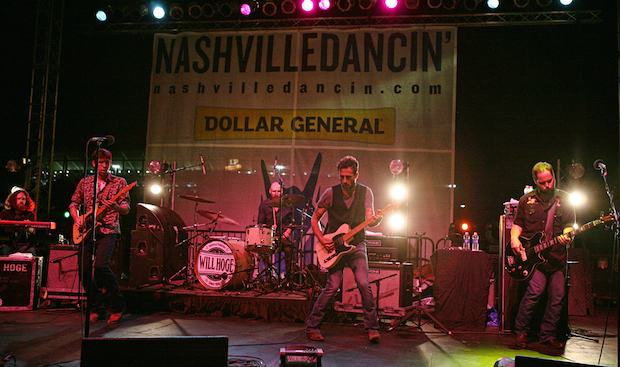 Will Hoge. Photo by Michael Brooks

We are already pretty familiar with local hero and man of the night Will Hoge (and his band), but we were really stoked to see him with the picturesque view of Titan Stadium and the river, complete with the Gen Jackson steam-liner gliding by on the water, laid out behind him. Every time we’ve seen him do his thing we’ve been impressed and this trend would continue. His sound is more rock-a-billy but it certainly has country music appeal. To us, he is more Bruce Springsteen than Tim McGraw, but he’d be happy to sell as well as either.

He rocked through a few, including one of his most popular songs “Second-hand Heart”, and then slowed it down for a few. He told a story about when he was living in Nashville, years before ever ‘making it big’, and he’d been right where we were, sitting at Riverfront Park as a fan, watching Ray Charles perform. Wow … we would have loved to have been at that show! Hoge then played “This Time Around” and we are certain everyone in attendance got goosebumps just like we did. We couldn’t be happier to see another local fellah do it big, and climb the charts in the process.

Be sure to check out another installment of the free fun THIS THURSDAY. The mostly local line-up features The Apache Relay, Steelism, Promised Land Sound and ELEL. Get your weekend off on a good foot this summer with Nashville Dancin’!