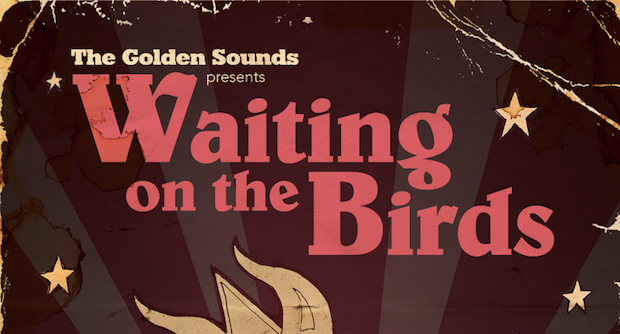 It’s been a minute since we’ve chatted about Nashville melodic indie-rockers The Golden Sounds, but, with an interesting new album coming out, it’s time to pick up the proverbial bullhorn again.  Last month around this time, the latest album, Waiting On The Birds, was released, and, interestingly, included an accompanying short story that was written and illustrated by front man Todd Evans.  When asked about the meaning behind the story, Evans states, “I love print and I love sitting down and listening to a record all the way through instead of just buying a single.  So releasing a short story with the album is my attempt to get people to slow down for a moment, sit and think, and enjoy.”

All of this peaking your interest? Wait until you see The Golden Sounds live.  Evan has gained a bit of notoriety about town for performing in jacket of lights, and the live performance is quite an experience.  Have a listen to the first single, “Across The Sea”, from Waiting On The Birds, and check out a video teaser of some of the incredible illustrations from the story book.  If you dig what you hear, then you should definitely plan to check out The Golden Sounds tonight at The End.  The show starts at 9 p.m., and Yumi & The System and Fancy get things started.  You can grab your $5 tickets right here.