Exciting news that we sat on last week to avoid it being lost in the Bonnaroo dust cloud, Forecastle Festival announced their daily schedules!  And, it is with this that we officially detox our livers, wash our dirty clothes and camping gear, and… start planning for the middle of July, so we can do it all over again in Louisville, KY.

Most of you that just returned from Bonnaroo experienced one of the hardest parts of a stacked lineup, there are a lot of tough decisions that have to be made.  How could you possibly pull yourselves out of the spectacle of The Flaming Lips to make it over to Frank Ocean, or did Frank Ocean just mesmerize you to the point that you couldn’t even think of catching the second half of Nick Cave?  It happens every year, we diligently study and circle and highlight and cross reference with festival ground maps.  While that is not nearly as prevalent given the smaller and more accessible nature of a festival like Forecastle, it is still something that requires a few decisions here or there.

Fear not fellow Forecastle-ians (do we have a name?), we have the schedules for each day for you below, so, plan, dream, and get excited all over again…

The image is pretty blurry, but you can click on it to take you to the Forecastle Festival online schedule. 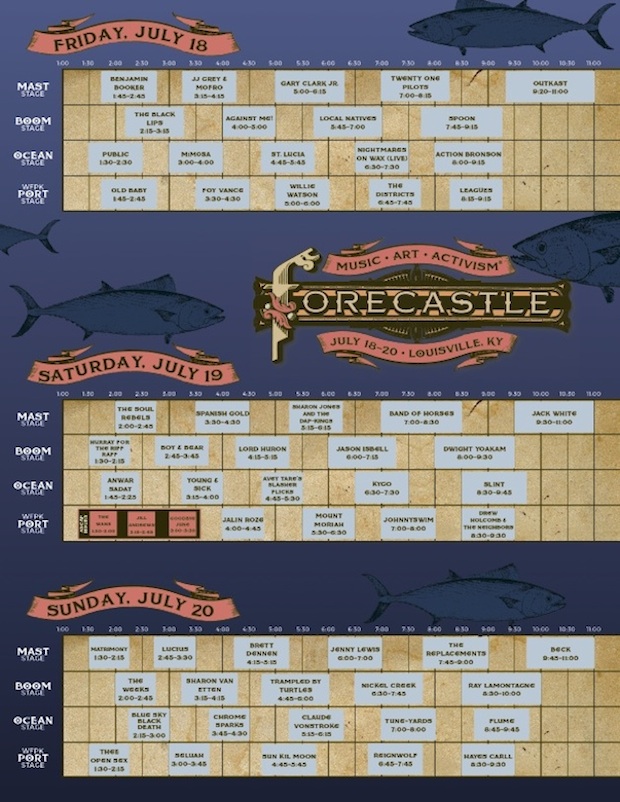 [TEASER PHOTOSET] We're Back From Bonnaroo!