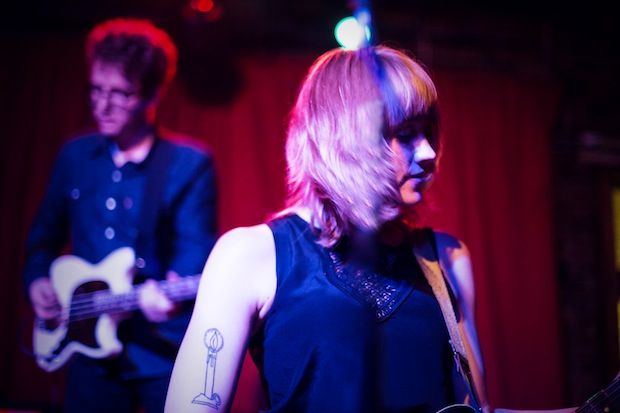 The beer was flowing and the night was fresh as we were bombarded with bits of 80s synth magic and sharp melodies. The beautiful indie rock musings of Wye Oak and Braids blessed us at Mercy Lounge last Tuesday late into the night. The experimental Canadian trio, Braids, came out of the gate a little timid at first but soon found their footing as they careened into a driving electric energy that fueled their live show. Wye Oak was another story. Through an inventive display of siren song like vocals and a bass heavy backdrop they immediately caught the atttention of everyone in the vicinity of their sound.

Keep reading for the full review and to see the the pictures of pure pop driven indie soul captured by No Country’s own Matt Cairns.

The crowd is slow to arrive as the Mercy Lounge begins to ebb and swell with more and more concert goers itching and aching for the experience to come. Braids started the night with somewhat of an awkward air. Timid at first they dove right in and as soon as the indie swells of dream pop blanketed the room, a hauntingly smooth confidence took over the band. Through an exposition of clear cut kicking drums and key driven trance like overlays, these guys demanded that you dig in. We must admit there were a few moments where the experience might have been a bit too dreamy. Floating and drifting its way in-between moments of a spaceship odyssey soundtrack and a rough, roaring, moving explosion, it was hard to keep track of which direction they were headed in. In retrospect we wouldn’t have it any other way. We already shared with you guys “Fruend”, from their latest album Flourish // Parish, but here is another that they shared with us last Tuesday; their track, “Amends”.

The anticipation was building fast as Andy Stack and Jenn Wasner of Wye Oak ran around the stage setting up a maze of instruments, cables, and gadgets. Then the murmur grew as they opened up into “Before” from their newest album, Shriek. Wasner slips into a smooth drawing voice as she sings the opening line, “this morning, I woke up on the floor…”. With bobbing blonde hair and swooning vocals, she captivated the audience in a grip, while Stack comes in with an even beat under the electronic intricacies that are littered throughout the song. The energy on stage did seem a bit divided much like the distance between both Wasner and Stack as they are now living across the country, one in Texas and one in Baltimore. But, you can tell that this has not hurt the writing prowess exhibited by both, spawning new and fresh sounds for our ears. Much like the knee cracking, bass heavy and inventive single “The Tower” which came crashing through early in the set.

The entire show was littered with both old and knew, as Wasner switched back and forth between bass, electric guitar and keys. You could see the evolution of musical style, and dissecting of their organic songwriting as their progressive performance was laid out before us. The prowess of Wasner as she seamlessly plugs away at her bass is organic and fluid. This meshes masterfully with the flow in their title track, “Shriek”, performed with a sense of calm and carrying melody over smooth whines and eclectic whistles. Then, to bring an end to the night after being called back out for an encore, the opening riff of “Civilian” began to hum from the speakers with the plucking of strings under a sweet siren song voice. The resulted lifting drive swept in like a fire, clearing and calling all to listen. If you’re unfamiliar with the title track to their 2011 release Civilian or have only heard it through the AMC’s Walking Dead, then check it out here.

The night was a fun exploration of musical taste. An adventure through an odyssey of atmospheric, female vocals with catching melodies that were strong and yet fleeting all at the same time. Wye Oak and Braids are a glimpse into a world of new and inventive sounds inspiring a wave of innovation in the field of indie organic fused rock.