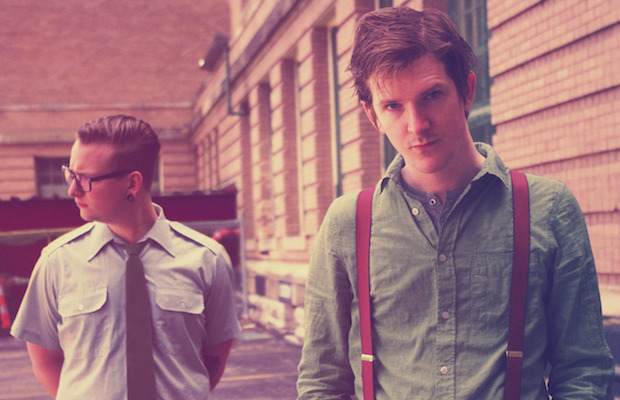 Ohio-based band Bad Veins are coming to Nashville to perform at The End with Brave Town and Yesteryear. We first introduced the indie pop duo to you back in November, and, since then, they have been hard at work promoting the release of their latest album, The Mess We’ve Made, by touring throughout the entire United States. After spending a few days in New York, Georgia, and Kentucky, Bad Veins are finally making their way back to Nashville for an 8 p.m. show. Tickets are just $10 and, per usual, it’s 18+. After the jump, get to know more about all three bands!

Benjamin Davis and Jake Bonta (who replaced founding member Sebastien Schultz in 2013) have been on a whirlwind tour since mid-April, and are showing no signs of slowing down. With the new album out for purchase, Bad Veins have been relentless in their efforts to promote their eccentric tunes. “Kindness,” one of the tracks off of The Mess We’ve Made, seems to take on a sinister meaning, despite the upbeat tune and title. It’s worth a listen before seeing the duo in person, and, if you like what you hear, then you can join the Bad Veins Army (their street team) and climb the ranks to not just help the band but to earn fun prizes and perks along the way.

Jay Ragsdale, Michael Kelley, and Dan Crotts are the members of this alternative rock band. Having just released an EP, Favor, the Nashville-based group are currently working on playing locally to promote their music, including a spot at Vanderbilt’s Rites of Spring Festival earlier this year. Have to the title track off of their EP:

Yesteryear are a five-piece band with a female lead singer, which, let’s be honest, is awesome. Don’t think that they’re following in the footsteps of someone like Paramore, though. Yesteryear are more edgy with their music, and definitely have a more rock-than-pop feel.

Bad Veins, Brave Town, and Yesteryear will perform TONIGHT, May 21m at The End. The show is 18+, begins at at 9PM (doors at 8PM), and tickets are available for $10.

Bonnaroo Band of the Day: The Naked and Famous