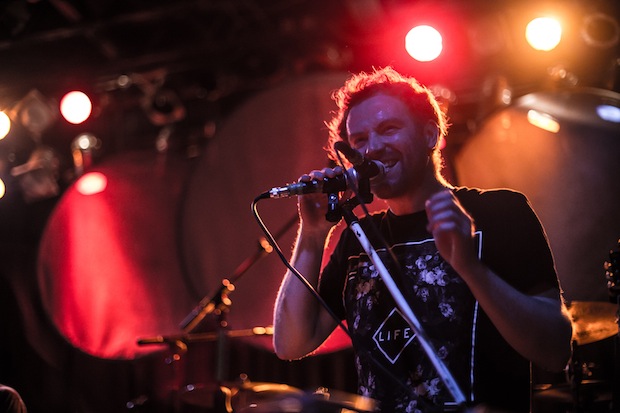 
Last Wednesday may have been pretty wet, but when two internationally known bands like Bombay Bicycle Club and Royal Canoe are in town, standing in line in the rain is just a happy adventure. It wasn’t just us No Country music fanatics at the Exit/In; the venue filled up quick and had a bigger turnout than any of those sketchy fairs down in South Nashville. We’re glad to see that Nashville has it’s priorities straight. Everyone that took shelter with us was rewarded with one killer night of dancing and good vibes. These two bands are trailblazers for new sounds and ways of approaching songwriting, and while many in the crowd were already familiar with BBC, hearing Royal Canoe for the first time was like getting an unexpected $10 handshake from your grandpa.

While we were able to get a photo pass for Royal Canoe, Bombay Bicycle Club was a no-go. #Bummer. Anyway, since Royal Canoe is about to be all y’all’s new favorite band, you should read on and see those photos.

Usually, when a band steps onstage, they come in with a grand and anticipated entrance. Not Royal Canoe. They sort of snuck in, leaving us going “Wait, what? Oh, they’re starting!” However, the Winnipeg band got down to business quick. Their sound is very unique; dancing somewhere between Alt-J and Bombay Bicycle Club with a dreamy and positive vibe. Even though they are electro-rock, the word “tribal” comes to mind. Royal canoe plays with two percussionists, two keys, bass, and electric guitar, and lead singer, Matt Peters, switches between keys, acoustic, and even an extra bass. “Bloodrush”, from their cleverly redundant EP called Extended Play EP, was one of their early songs in the set and it certainly caught everyone’s attention. Between songs, the band was easy-going and told us that it was their second time in Nashville, and that our city has magical powers that prevent musicians from playing wrong notes. Please… Everybody knows that! After some jokes and accusing each other of having fanny packs, they leapt into their incredibly dynamic and funky song, “Bathtubs”. In this song, as well as in many others, Peters sings into two distorted mics simultaneously, giving him a kind of Jeckyll and Hyde effect. The two percussionists’ heads bouncing weren’t the only thing in unison; the entire six member band was as tight as the mechanisms in a metronome. They have a colorful variety of builds, breaks, and drops all the while being 110% in sync. After two solid albums as a band since 2010, we’ve got a good feeling that we’ll be hearing a lot more about Royal Canoe very soon.

By the time Bombay Bicycle Club hit the stage, the Exit/In was on the cusp of a sold out show with people watching from the stairs. Bombay Bicycle Club is touring in support of their album, So Long, See You Tomorrow, which was dropped February of this year. They began as silhouettes in a massive yellow cloud and strobe lights, playing “It’s Alright Now”. Their third song, from the previous album A Different Kind of Fix, was “Shuffle”. As soon as that trademark Baba O’Riley-ish intro started, the crowd was thrown into wild excitement and faces all around us sang, “You gave to me. All I know. I will stay here. I will not go”. Lead singer, Jack Steadman’s vocals come from his soul and he, with the rest of the band, dance on stage with genuine emotion. The word “infectious” would be an understatement.

Behind the band, there were three giant discs with cartoony visuals projected on them. Most anyone who knows their 2011 album, knew exactly what song was next when a sleeping man flying through space was on those discs. Steadman invited the magnificent Liz Lawrence to join him singing “Home By Now” (A personal favorite of ours), and a sexy line drawing was dancing in the projections. We’re trying to stay objective and not impulsively say this was the best song of the night… but we’re 98.999% percent sure it was. Other supremely notable songs included in the setlist were the latin dance, “Feel”, with an Indian sitar effect on the guitar, and they quieted things down with “Eyes Off You” from the recent record. Bombay Bicycle Club and Royal Canoe tag-teamed the last song. After the crowd chanted “Bombay” for an encore, drummer Suren de Saram led everyone in a slow clap that seamlessly led into the first of two encores. Guitarist Jamie MacColl was deep in the zone and was swinging his strings like a katana, while everyone (No Country members included) was jamming out. With it’s absence throughout the set, everyone knew that the last encore could be none other than “Carry Me”. Since the show, we’ve had So Long, See You Tomorrow playing on repeat. Now excuse us while we go punch-dance outside.