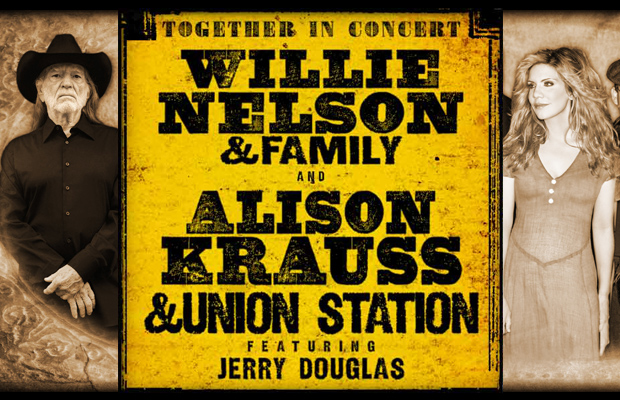 Two American icons are performing right here in Nashville tonight.  No, we’re not talking about one of those nightly Grand Ole Opry showcases, we’re talking about a night under the stars at The Woods at Fontanel with Willie Nelson & Family and Alison Krauss & Union Station!  This is one of those nights you will remember forever, and getting in should be your highest priority before it kicks off around 6:30 tonight.  As of the writing of this article, there are a few VIP box seats remaining, or, you lucky ducks, there are bunch that are going for under face value on Craigslist and Stubhub!  Continue reading to find out why we’ll definitely be there tonight, and you shouldn’t miss out!

In a town filled with aspiring artists and bonafide superstars, there isn’t a one of them that wouldn’t bend down on a knee for ole Willie.  Even in a town like Nashville, it’s not everyday you have the opportunity to see a unanimously renowned living legend.  The Texas born, world educated Nelson is a household name to most, but it almost wasn’t that way.  Growing up in the Great Depression, a young Nelson found moderate success as a musician and songwriter in the later ’50s and early ’60s, and was even admitted into the Grand Ole Opry in 1964, but he couldn’t handle the Nashville machine.  So, he retired… in 1972.  That’s right, in 1972 Willie Nelson called it quits.  Thank god the hippies pulled him out of his stoner daze, otherwise we wouldn’t have seminal Outlaw Country albums like Red Headed Stranger or Honeysuckle Rose, and you would have never taken a road trip with the mandatory “On The Road Again.”  Guys like Townes Van Zandt may have drank themselves out of the history books, because there would have never been “Pancho and Lefty,” and I probably would have drank myself into something awful if there had never been the supergroup, The Highwaymen.  Willie Nelson was my introduction to country music as a kid, and tomorrow night will be my 8th time seeing him.  Seriously, the dude is 81 years old… how many more chances are you going to get at this?

At half the age of Willie Nelson, Alison Krauss is no spring chicken to music.  She’s been at it since the age of 10, signed with Rounder Records at the age of 14, and released her first record at 16.  By 21, she was nominated for a Grammy and was admitted into the Grand Ole Opry, and we’re not talking about these over-produced boy bands and other pop kid crap that is out there these days, we’re talking about honest musicians that absolutely own their craft.  Since then, she has gone on to win an astounding 27 Grammys in 41 nominations on only 16 albums… reread that last sentence again.  This woman is a pioneer in the music industry, and that even exceeds her queen-like status in the bluegrass & Americana fields.  She’s as well-known for her songs and albums as she is for her soundtracks (Oh Brother Where Are Thou?, Cold Mountain), but she’s equally well-known for dueting up with pretty much anyone famous that you can name in Nashville at one time or another.  So, join us, Nashvillians, and let’s play the game of who is going to join Alison (and hopefully Willie) on stage tonight?  Are you not convinced to find tickets yet?

Willie Nelson & Family and Alison Krauss perform TONIGHT Friday, May 17, at The Woods at Fontanel. The show is all ages, begins at 6:30 pm, and a very limited number of VIP tickets are still available for $200.  You can also check Stubhub or Craigslist, as extras are being unloaded under face value.  HURRY!