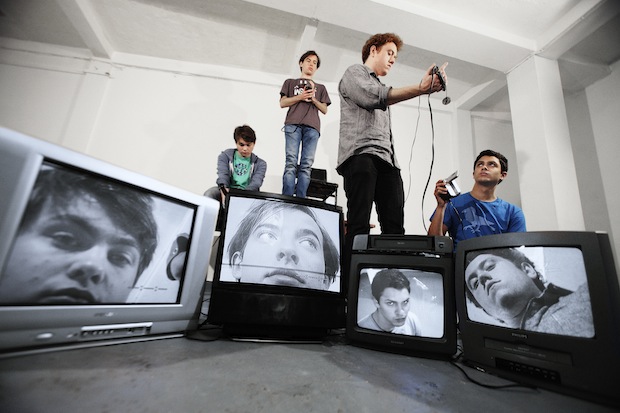 Tonight has been highly anticipated by our crew at No Country. Guaranteed, Bombay Bicycle Club and Royal Canoe will be turning the ears of anyone within hearing distance of Exit/In. Five years from now, the critiques will say that these bands were five years ahead of their time. This is Music City, and we’ll wager that you readers already know Bombay Bicycle Club, but, check this out, Royal Canoe is the other side of the coin. They both experiment with new sounds and pry at barriers within genres, and having them together in Nashville is going to be explosive. Lets do this.

Doors open at 8:00, and we’re expecting a huge turnout (assuming all the college grads haven’t flown the coupe). It’s been a great week for live music already with Tegan & Sara, Toadies, and Reignwolf. Let’s see if hump day is truly the peak. Learn more about the lineup and watch some music videos after the jump.

The guys in Bombay Bicycle Club have been playing together since they were 15. Young and ambitious, they were fast successes in Britain, winning competitions, and dropping EPs on their own independent label, Mmm… Records. By the time 2008 rolled around, two things happened; they were named “the hottest band to come from North London for quite some time” (NME), and they finally finished higher secondary school (English high school). While the members are young in age, the band itself is quite mature, having been around the professional music block quite a few times. Bombay Bicycle Club have released four albums (their most recent, So Long, See You Tomorrow, was released in February), and they have sold over 100,o00 copies in the UK of each of their first three. Who needs college anyway?

Manitoba band, Royal Canoe, is a genre bending six-piece that released their first album, Today We’re Believers, last year. Also, a super trippy video for “Button Fumbla” was released just last month. The best way to describe their sound may be to take a look at who they’ve toured with; Alt-J and Bombay Bicycle Club. They’re inventive, groovy, and totally unique. Take a look at their video for “Bathtubs”, and we think you’ll get the gist.